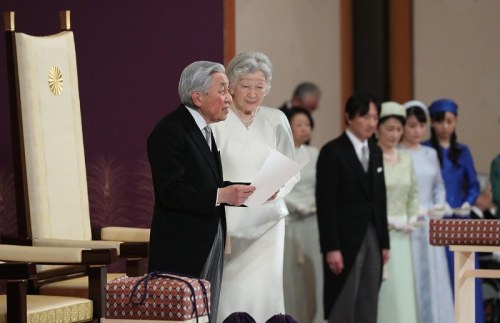 Addresses by His Majesty the Emperor

Today, I am concluding my duties as the Emperor.

I would like to offer my deep gratitude to the words just spoken by Prime Minister Shinzo Abe on behalf of the people of Japan.

Since ascending the throne 30 years ago, I have performed my duties as the Emperor with a deep sense of trust in and respect for the people, and I consider myself most fortunate to have been able to do so. I sincerely thank the people who accepted and supported me in my role as the symbol of the State.

I sincerely wish, together with the Empress, that the Reiwa era, which begins tomorrow, will be a stable and fruitful one, and I pray, with all my heart, for peace and happiness for all the people in Japan and around the world.