The bullish Hammer is a significant candlestick pattern that occurs at the bottom of the trend. A Hammer consists of a small real body at the upper end of the trading range with a long lower shadow. The longer the lower shadow the more bullish the pattern. The prior trend for the Hammer should be a down trend.

On the day the Hammer pattern forms, the market is expected to trade lower and touch a new low. However, at the low point, there is some amount of buying interest that emerges which pushes prices higher to the extent that the stock closes near the high point of the day.

The price action on the Hammer formation day indicates that the bulls attempted to stop the prices from falling further and are reasonably successful to close the prices on a high note. 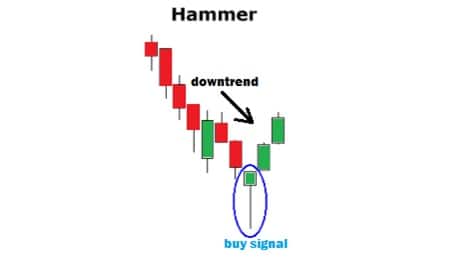 Hanging Man is a single candlestick pattern and a top reversal pattern. It signals a market high and is classified as a Hanging Man only if it is preceded by an uptrend and is seen after a high. A bearish Hanging Man pattern basically indicates selling pressure at higher levels.

When the market is in an uptrend and bulls are in control, we see the formation of higher highs and higher lows. However, this pattern shows that bears have managed to make a comeback and they are trying to break the stronghold of the bulls and close at the lowest price point. 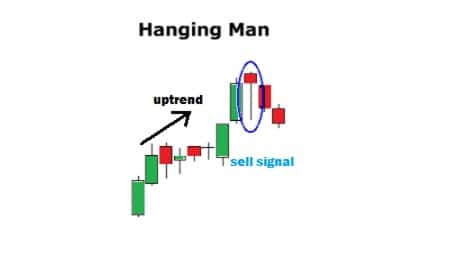 Putting Up a Strong Defense