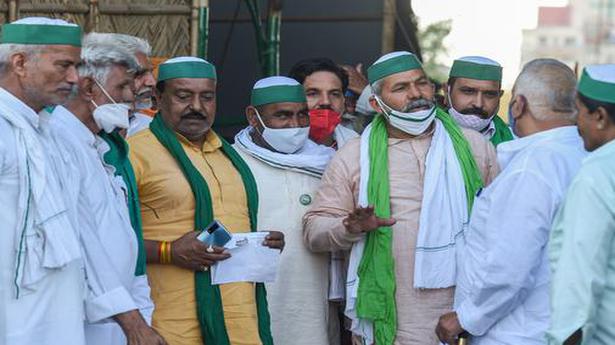 The protests are being held on the call given by the Samyukta Kisan Morcha which is spearheading the ongoing farmers’ protest.

Farmers, including women and youth, in parts of Punjab and Haryana on Wednesday hoisted black flags on houses and vehicles and burnt effigies of Prime Minister Narendra Modi as a part of their protest against the Centre’s three agricultural laws.

Also read: Opposition parties back farmers’ protest on May 26

The protests are being held on the call given by the Samyukta Kisan Morcha (SKM), the umbrella body of farmer unions, which is spearheading the ongoing protest. Tens of thousands of farmers, mostly from Punjab, Haryana and western Uttar Pradesh, have been camping at several places at the borders of Delhi for six months now, seeking the repeal of the farm laws that were enacted by the Centre last year among other demands.

A group of farmers at Pandher Kalan and Chabba villages in Punjab’s Amritsar district were seen burning the effigy of the Prime Minister and shouting slogans against the BJP-led government at the Centre.

“We are protesting across the State by hoisting black flags on shops, houses, vehicles etc and by wearing black turbans and black dresses. Also, we will burn effigies and stage demonstrations to register our opposition against the anti-farmer policies of the BJP government,” Sarvan Singh Pandher, general secretary of the Kisan Mazdoor Sangarsh Committee, told The Hindu.

“We won’t settle for anything less than the repealing of the new farm laws. Besides we also want the government to revoke the amendment to the Electricity Act and also provide legal guarantee on Minimum Support Price,” he said.

Gurnam Singh of Bharatiya Kisan Union (Chaduni), the outfit at the forefront of the protest in Haryana, said that farmers in large numbers would step out of their houses to stage protests against the BJP-led government.

With the Centre not acceding to the farmers’ demands, the SKM had given a call to observe a nationwide ‘black day’ against the government and its ‘anti-people policies’.