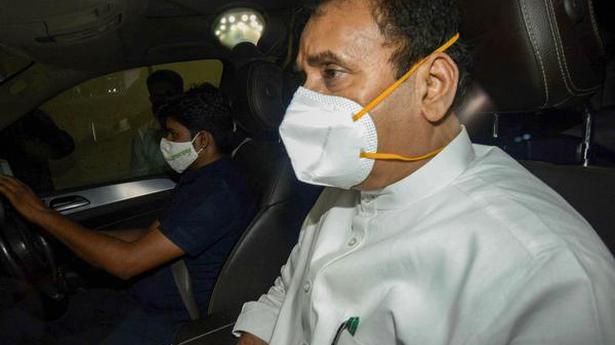 The Bombay High Court on Wednesday adjourned to June 8 the hearing of a plea filed by the Maharashtra government to quash portions of the First Information Report (FIR) filed by the Central Bureau of Investigation (CBI) against former State Home Minister Anil Deshmukh.

A Division Bench of justices S.J. Kathawalla and S.P. Tavade presided over the matter on a court holiday. The FIR was filed after a preliminary inquiry was conducted against Mr. Deshmukh by the CBI as directed by another Bench of the High Court.

The petition filed by the Additional Chief Secretary of the Home Department is seeking to quash portions in the FIR that pertain to reinstating suspended assistant police inspector Sachin Vaze and the transfer of other police officers. It is also alleged in the plea that the FIR was an attempt to destabilise the Maha Vikas Aghadi government.

On Wednesday, senior advocate S.V. Raju representing the CBI submitted a note to the Bench requesting for the same to be heard by the same Bench that directed the agency to conduct an inquiry against Mr. Deshmukh.

On April 5, another Bench had directed the CBI to conduct a preliminary inquiry into the letter written by former Police Commissioner Param Bir Singh making allegations against Mr. Deshmukh. Soon thereafter on April 21, the FIR was registered against Mr. Deshmukh under Sections 120 B (criminal conspiracy) of the Indian Penal Code and Section 7 (public servant taking gratification other than legal remuneration in respect of an official Act) of the Prevention of Corruption Act.

The case will be heard by a Division Bench of Chief Justice Dipankar Datta and justice G.S. Kulkarni on June 8.

The petition states, “The subject of transfer and posting of officials cannot form a part of the investigation in the FIR. The transfer of officials and reinstatement of Mr. Vaze are aspects which would fall within the administrative domain of the State and its officers and as such the FIR would not prima facie disclose any criminality.”