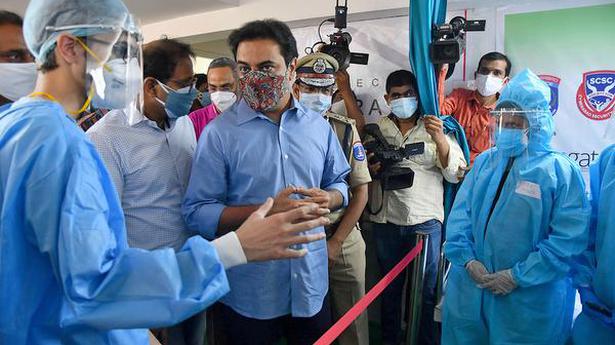 Industries Minister K.T. Rama Rao said the Centre needs to permit more COVID-19 vaccine manufacturers to supply given that the demand-supply equation for the shots in the country is “quite bad.”

“My personal opinion is the Government of India should reach out and give whatever [support] needed to Pfizer, Moderna, Sinovac and to other vaccine manufacturers in the world who can give us as much supply as possible in the shortest possible time,” he said after inaugurating a 100-bed facility for COVID-patients in the IT hub of the city.

Suggesting such an approach since Pfizer and Moderna have conveyed that they would prefer dealing with the Centre when some States sought to source vaccines from them, Mr. Rao said, “I am also told there are vaccines lying idle elsewhere in the world, in Canada, Denmark and the United States.”

The Minister said this pointing out to how the demand for the vaccine in the country is “quite high [while] the supply is meagre.”

“Unfortunately, while we are the vaccine hub of the world, it is unfortunate that we don’t have vaccines for our own people,” he said.

Noting that “everything is being governed by the Government of India and I hope the situation will improve,” Mr. Rao said if sufficient vaccine doses are made available to Telangana, the State government has the capability to administer one million doses per day. “We can cover the entire State population in about 45 days,” he said.

Earlier, he went round the 100-bed facility, including six bridge ICU beds, under Project Ashray that has been co-anchored by United Way Hyderabad and Society for Cyberabad Security Council (SCSC) with support from Hyderabad Software Enterprises Association, American Chamber of Commerce, Telangana Social Impact Group and TIE Hyderabad as well as the Cyberabad Police Commisionerate.

The facility is intended for mild and moderate COVID-19 patients. The medical infrastructure, doctors, nurses, medical staff and day to day operations will be taken care by Grace Cancer Foundation.

A release said several companies have donated and extended CSR grants while volunteers worked relentlessly to turn the idea into operations in just six days. Once the number of COVID-19 cases decline, the plan is to donate the infrastructure to government and other charity hospitals.