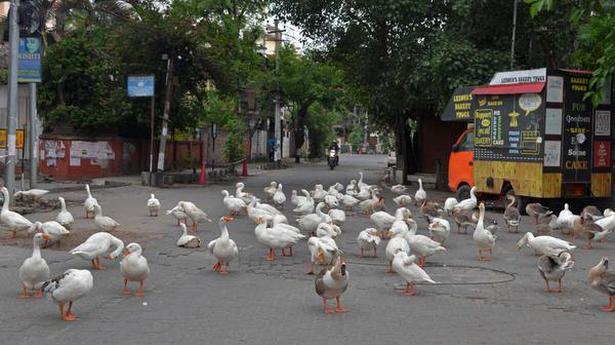 N.K. Arora, Chairman of India’s COVID-19 Working Group of the National Technical Advisory Group on Immunisation (NTAGI), had said Indian data does not show specific predilection of the currently circulating virus strains either for the youth or paediatric age group.

“But based on what the experience is available from our own country and that from other parts of the world, there is no reason to believe that children will be disproportionately affected in the coming weeks and months or in the next wave,” he said.

You can track coronavirus cases, deaths and testing rates at the national and State levels here. A list of State Helpline numbers is available as well.

Here are the latest updates:

Only PM’s photo on vaccination certificate, responsibility on states: Priyanka

In a scathing attack against the Centre over the shortage of Covid vaccines, Congress leader Priyanka Gandhi Vadra on Wednesday alleged that vaccines in India were a means for Prime Minister Narendra Modi’s “personal publicity” rather than a tool to save people’s lives.

This was so from the beginning of the pandemic, the Congress general secretary said in posts on Twitter and Facebook. She also alleged that the Modi government has pushed the country into a “swamp of vaccine shortage” and left India, the world’s largest vaccine manufacturer, dependent on vaccine donations from other countries.

Accusing the Centre of shifting the onus of vaccination on to states, Priyanka Gandhi said there is now only Prime Minister Modi’s photo on the vaccination certificate while the rest of the responsibility has been put on the states.   “Today, the chief ministers of states are sending messages to the Central government over the lack of vaccines,” she said in Hindi. – PTI

We made the mistake of not going ahead with the procurement and manufacturing of COVID vaccination well in time but there is no point discussing that now, said Delhi Chief Minister Arvind Kejriwal after inspecting a vaccination centre in Dwarka.

“Not even a single state government has been successful in procuring vaccine doses from the international market.”

“Within 24 hours, companies which manufacture vaccines can be directed to ramp up production. Why isn’t the Centre showing the required sense of urgency regarding this?” he asked.

“The situation is like a war; if there was an actual war occurring, would states have had to make their own arrangements to defend themselves? It is the Centre’s responsibility,” Mr. Kejriwal said. – Jatin Anand

Vaccination centres across the country are also being shut, he noted.

“Health Minister Harsh Vardhan should refrain from making false statements. When the country was struggling with lack of oxygen, he was saying there is enough oxygen in the country,” he said.

Such statements by the Union Health Minister are creating “resentment” among the public, he claimed. – PTI

More than 1.77 crore COVID-19 vaccine doses are still available with states and union territories, and they will receive one lakh more within the next three days, the Union Health Ministry said on Wednesday, May 26, 2021.

The Centre has so far provided, both under the free of cost category and through the direct state procurement category, more than 22 crore vaccine doses (22,00,59,880) to states and UTs, it said.

Of this, the total consumption including wastages is 20,13,74,636 doses, the ministry said, citing data available at 8 am Wednesday.

“More than 1.77 crore COVID-19 vaccine doses (1,77,52,594) are still available with the states and UTs to be administered. Furthermore, 1,00,000 doses are in the pipeline and will be received by the states and UTs within the next three days,” the Ministry said.

As part of the nationwide vaccination drive, the Centre has been supporting states and UTs by providing COVID-19 vaccines free of cost, and by also facilitating direct procurement by them, the Ministry said. — PTI

Prime Minister Narendra Modi said on Wednesday, May 26, 2021, that the planet will not be the same after COVID-19 and noted that the events in future will be remembered as either pre or post-Covid.

Delivering the keynote address on the occasion of “Virtual Vesak Global Celebrations” on Buddha Purnima, he said the world has not seen a pandemic like this in a century.

However, he added, there is now a better understanding of the pandemic, and described vaccine as absolutely important to save lives and defeat the virus.

Mr. Modi also extended condolences to those who have suffered and lost near and dear ones in the pandemic, and said he grieved with them. — PTI

The State government has also decided to set up COVID Care Centres at the levels of the community health centre (CHC) and primary health centre (PHC) throughout the state for effectively tackling the second wave, he said.

“We have decided to ramp up the bed capacity in and around Shillong in view of the surge in the COVID-19 cases,” Tynsong said on Tuesday after a daily review meeting on COVID-19.

He said the Health Department inspected and identified three places in Shillong for use as COVID Care Centres. These are ITI office building at Rynjah, BTC new building at Malki and the Directorate of Commerce and Industries at Nongrim Hills.

“After due deliberation, we have decided to set up COVID Care Centres in these three places,” Mr. Tynsong said. — PTI

Despite last year’s United Nation’s call for global cease-fires to tackle the COVID-19 pandemic, many conflicts never stopped including in Syria, Yemen and Congo and new ones erupted making it more difficult to control the spread of the virus and care for infected people in many countries, the UN humanitarian chief said Tuesday.

Mark Lowcock stressed the link between conflict, COVID-19, and health care at a virtual Security Council meeting on civilians caught in conflict.

In March 2020, as the pandemic was starting to circle the globe, U.N. Secretary-General Antonio Guterres called for global action “to put armed conflict on lock-down and focus together on the true fight of our lives” against “a common enemy — COVID-19.” While there were some positive responses, Lowcock said deadly conflicts continued and emerged or got worse including in Ethiopia, Mozambique and between Armenia and Azerbaijan, contributing to a rise in the number of people forcibly displaced in 2020.

Lowcock noted “multiple reports of atrocities” against civilians caught in conflicts during the pandemic.

He singled out the dozens of schoolgirls and civilians killed and injured in an attack on a high school in Afghanistan earlier this month, reports of mass rapes and killings in Ethiopia’s Tigray region, and the just ended conflict between Israel and Gaza’s Hamas rulers that saw over 200 deaths, mainly Palestinians. — AP

The Indian Council of Medical Research (ICMR) is unlikely to immediately undertake a fourth national serology survey to estimate the extent of exposure to the coronavirus since January. Officials told The Hindu that though discussions were still on, undertaking such a study presented newer logistical challenges and the ongoing vaccination drive could read to erroneous inferences.

The ICMR has conducted three national serology surveys since May 2020 and found that the exposure to the virus was much higher than that was reported by confirmed cases. The third serosurvey that measured the spread of infection between August and December found that 21% of India’s adult population and 25% of those in the 10-17 age group may have been infected.

Karnataka on Tuesday managed to tide over the crisis caused by the disruption in oxygen supply owing to the breakdown in production units that resulted in over 20% lower supply. While the shortfall had caused anxiety among the hospital administrators, the supply of oxygen remained unhindered on Tuesday as buffer stock was used.

The units that had broken down in Ballari started functioning by Tuesday evening and had already started supplies. “All the oxygen producing plants in JSW Steel premises are up and there is no problem in production,” Ballari Deputy Commissioner Pavan Kumar Malapati confirmed to The Hindu.

Curfew extended till June 5 in Tripura

The Tripura government announced extension of curfew till June 5 to curb the spread of the pandemic. It however granted relaxation between 6 a.m. to 12 noon to allow people to purchase essential commodities and foodstuffs.

The 24-hour uninterrupted curfew imposed earlier this month was to end at 5 a.m. on Wednesday, but the Cabinet on Tuesday resolved to extend it in view of the spread of infections. Senior Minister Ratan Lal Nath termed the COVID-19 situation in Agartala in particular and west Tripura district as a whole as serious and grim.

On May 14, the Delhi Cabinet had approved financial assistance to all individuals holding Public Service Vehicle (PSV) badge drivers of para-transit vehicles and permit holders of para-transit public service vehicles in the wake of the second wave of COVID-19 and a series of lockdown implemented by the government to contain it.

The response to Karnataka’s global tender to procure vaccine for COVID-19 has come for the supply of Russian made Sputnik V. The two responses have not come from the vaccine manufacturer, but from companies that are acting as suppliers of the Russian vaccine.

(With inputs from our Correspondents and agencies)