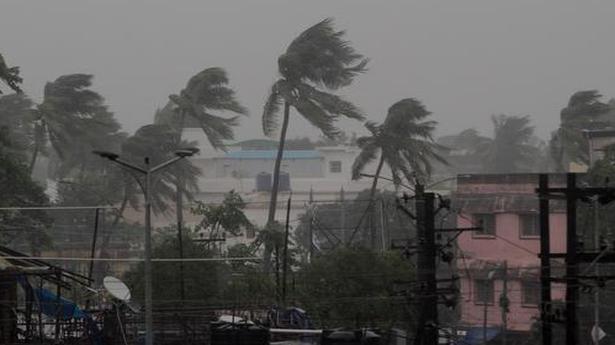 The landfall is taking place in Bahanaga and Remuna block, south of Balasore town, and is expected to complete before 1 p.m., according to the Special Relief Commissioner.

The very severe cyclonic storm, Yaas, crossed north Odisha coast about 20 km south of Balasore between 10.30 a.m. and 11.30 a.m. on Wednesday with an estimated wind speed of 130-140 kmph gusting to 155 kmph, the India Meteorological Department said.

The system moved northwestwards and was entering Mayurbhanj district. It is estimated that wind speed would remain in the range of 100-110 kmph in Mayurbhanj.

Preliminary reports indicated that there was no report of major loss of lives. In Balasore and Keonjhar district, trees reportedly fell on two persons which would be ascertained by the respective District Collectors.

Even telecommunication network did not suffer any major damage. Power infrastructure was partially damaged due to falling of trees on transmission lines. Roofs of thatched houses were, however, blown away by the strong wind.

Hundreds of villagers in Odisha’s Balasore and Bhadrak districts were marooned following ingression of sea water in coastal habitations.

As predicted by the IMD, tidal surge was observed above four metres in the two districts. At one or two places, saline embankment breached resulting in inundation of low-lying areas.

Restoration work in Balasore and Bhadrak began soon after the cyclone moved away from Balasore district.

“National Disaster Response Force and State fire service personnel started road clearance by removing uprooted trees in Jajpur, Jagatsingpur and Kendrapara where not much damage was observed. By 4 p.m., the road communication will be restored. Power restoration works have begun on a war-footing in the three districts,” informed Mr. Jena.

The cyclone caused major damage to the tree cover in Balasore and Mayurbhanj districts. Thousands of trees were reported to have fallen in Nilagiri area of Balasore district.

“Similipal Biosphere in Mayurbhanj district has been receiving heavy rain since Tuesday and it is still continuing. Water flowing down from Similipal usually feeds Burhabalanga river. The district administration is assessing if it could result in flash flood. Keeping this in mind, villagers from low-lying areas on both sides of Burhabalanga are being shifted to safer places,” he said.