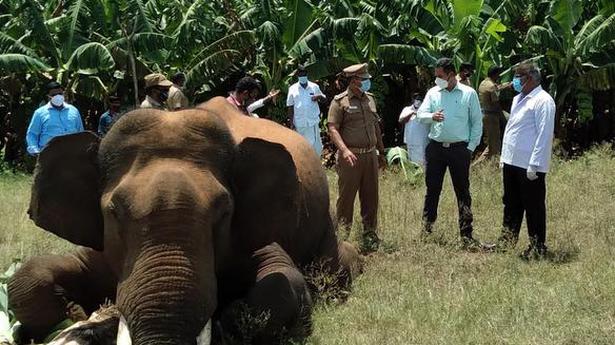 The tusker came into contact with an electric fence erected by a farmer; a search is on for the farmer

A tusker was electrocuted after it came into contact with an electric fence erected by a farmer near the Karachikorai forest check-post, near Bhavani Sagar Forest Range in Sathyamangalam Division, here on Wednesday.

The plot of land, owned by Rajan (45), is located 200 metres away from the forest boundary and the farmer had erected a fence to protect his banana plantations from wild animals. On Tuesday night, the elephant, believed to be 35 years old, attempted to enter the field and came into contact with the live wire and got electrocuted.

On receiving information, forest officials inspected the spot and found the carcass. Officials from Tamil Nadu Generation and Distribution Corporation Limited (TANGEDCO) inspected the spot to check whether power connection to the fence was illegally drawn from the house.

A team, led by K. Ashokan, wildlife veterinarian of Sathyamangalam Tiger Reserve (STR), carried out a post-mortem examination and samples of vital organs were lifted and sent for laboratory analysis. After the autopsy, the tusks were removed and the carcass was buried in the forest. A search is on to nab the farmer.

Preliminary inquiries revealed that the farmer had removed the electric wires from the carcass, and they were later recovered by officials. This is the second elephant electrocution in the division in a week — on May 21, a 35-year-old tusker was electrocuted at a farm land at Kongarpalayam, near T.N. Palayam Forest Range, a case in which the farmer involved was arrested.