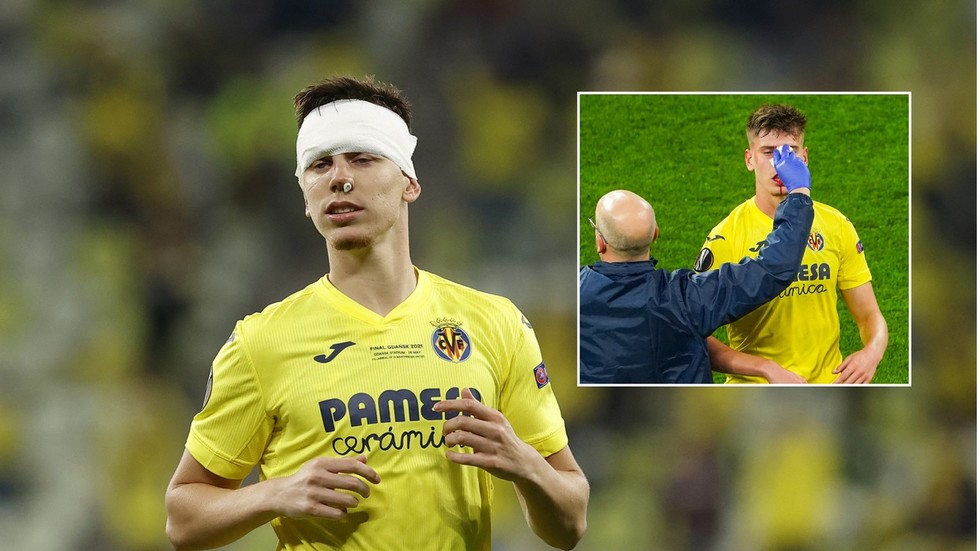 Juan Foyth has earned the respect of football fans worldwide by soldiering on after a nasty collision in the Europa League final between his side Villarreal and Manchester United in Gdansk on Wednesday evening.

The incident occurred midway through the first half, with the score still tied at 0-0.

Slipping over the ball as he attempted to control it with the outside of his foot, the Spurs loanee collided with Paul Pogba’s knee on the way down.

Non-stop blood gushed from his nose, and the Yellow Submarine medical staff’s sticking of a cotton bud up his nose to stop the flow caused many fans to wince.

Later having his head bandaged up, Villarreal’s English language account were the first of many to make comparisons to England legend Terry Butcher, who ended up in a a similar state during an Italia ’90 qualifier against Sweden.

“Argentines are built warriors,” remarked one punter online, as others called him a “beast” and an “exceptional defender”.

More concerned parties though worried he could be carrying a concussion and made calls for UEFA to impose protocol and automatic substitutions for such goings-on.

At the time of the clash, it was noted how Foyth had the most tackles, interceptions and “bloody noses” of any player in the pitch.

Yet on Latin American TV, an angle of him having wrapping the bandage around his head reportedly saw the 23-year-old, who was called “[hard as] nails” by a Spurs fan account, refusing to be brought off.

Juan Foyth already has the most tackles, interceptions and bloody noses of any player on the pitch 😲 pic.twitter.com/mhOPifpGja

But hooked he was eventually in the 88th minute.

Lunging in on Luke Shaw with raised studs, some felt he was lucky not to be shown an automatic red and get off with a caution.

As a safety measure, to avoid their outfit being reduced to 10 men with another yellow, and perhaps for the youngster’s own health, Unai Emery brought Foyth’s eventful evening to an end just before extra time with the honors even on 1-1.

After Gerard Moreno gave the Spanish side the lead, by slipping in behind the wall and latching onto a Dani Parejo free kick, Edinson Cavani leveled with a scrappy finish inside the box shortly after the interval.

As summit ends, G-7 urged to deliver on vaccines, climate