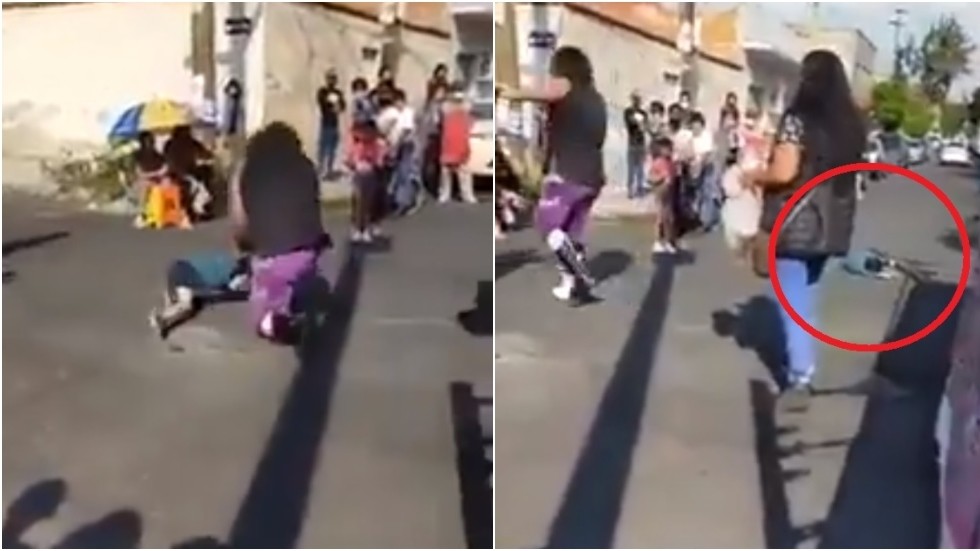 A wrestler known as ‘El Vikingo’ has caused outrage in Mexico, after being caught on video slamming a five-year-old to the hard concrete floor at a small show in the country’s capital city before the weekend.

The incident took place in the humble borough of Venustiano Carranza in Mexico City.

Lying on the floor in the street, away from the ring that was especially set up for the occasion, Einar Cruz is approached by the child.

When the boy, Mateo, playfully attempts to get him in a chokehold, Cruz gives off an OTT reaction that shocked fans enjoying the show.

In the footage, several of them can be seen rushing to Mateo’s aid and angrily blasting El Vikingo for the volatile outburst.

Called to the scene, local police placed Cruz under arrest as officers had to stop certain members of the crowd from physically assaulting him.

Yet after Mateo’s mother pardoned the wrestler after appearing before the prosecutor’s office in Mexico City, El Vikingo has been a free man since Sunday – at least for now.

Commenting on the matter, Mexico City Attorney General Ernestina Godoy revealed that Cruz’s crime is not one “that deserves deprivation of liberty”, as “injuries that take 15 days to heal are not punishable”.

“But here we are working to get him punished because he is a child, but we had to release him at that time,” she added, which has led some fans to lament an “embarrassing” lack of justice.

In more bad news for him, the Mexico City Wrestling Commission confirmed on Monday that it has indefinitely suspended El Vikingo.

Speaking TV network Telediario, Mateo insisted he wanted to choke out Einar El Vikingo due to him fighting  on the villains’ team.

To make him feel better, though, an array of top wrestlers have pledged solidarity with the boy and even visited him at his home while he recovers.

With names as colorful as Cybernetic, Octagon, Sharlie Rockstar, Marcela, Queen Dorada, White Tiger and Tyson the Beast, they showered him with toys and wrestling masks.

“A good and productive day…,” began Marcela on Twitter alongside a photo of her and a man with the sad youngster.

“Today I paid a visit to Mateo, the boy who was attacked and threatened by the pseudo fighter ‘Einar El Vikingo’.

“The wrestling family is outraged by this action. We must not allow violence. Hopefully the authorities will get to work,” she signed off.

While many complimented Marcela for her gesture, one detractor remarked: “You can see that the child kicks him in the balls.”

“Of course, the fighter was wrong wrong to react violently. But it is also noticeable that the child is spoiled [by those] who do not put limits on him.”

What’s worse is that he wrings the arm, and then tosses him. He looks right at the kid while he does it, so the “didn’t know it was a child” defense is out the window. And he piefaces(at least it looks like it) a woman before hightailing as a fairly big dude intervenes.

Across the board, however, others have refused to victim blame with one punter pointing out: “What’s worse is that he wrings the arm, and then tosses him”.

“He looks right at the kid while he does it, so the ‘didn’t know it was a child’ defense is out the window.

“And he piefaces (at least it looks like it) a woman before hightailing as a fairly big dude intervenes.”

As much as a staple of the culture as boxing or soccer, wrestling, known locally as “Lucha Libre” (or freestyle fighting), enjoys huge popularity in Mexico.

Its biggest stars have been honored with statues and enjoy celebrity status there, while some, such as Rey Mysterio, managed to crossover into huge international championships such as the WWE in the US after starting out in the Mexican AAA.

Mirzapur star Rasika Dugal on working in the web medium: It was a completely different style of storytelling