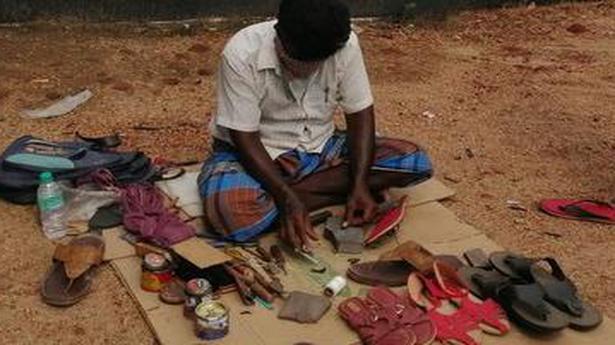 Murugesh (45) who runs a make-shift cobbler shop on the High Road in Chittoor is anxiously waiting for his customers. He used to run his family somehow with the paltry income of ₹200 a day before the outbreak of virus. During the lockdown imposed last year during the first wave, he had a harrowing time to make his both ends meet.

“After the curbs relaxed, my per day income reduced to half of what I used to earn before. And now, I make ₹40 a day at best. People are staymg indoors and the restricted business hours owing to the partial curfew has almost sunk my business. I have no clue how to run my family,” says Murugesh.

The second wave of pandemic has delivered a blow not only on life but also lifelihood and the cobblers in the district who usually run their make-shift vends from the footpaths are no exception.

With roads getting deserted from noon, the cobblers lose their business hours as their daily choir gets busy only after 10 a.m. Their regular patrons are schoolchildren who get their bags and shoes repaired, and middle class families, mostly villagers who visit the towns on some works.

An estimated 500 families depend on this profession in Chittoor district and most of them live in Tirupati, Srikalahasti, Chittoor, Madanapalle and mandal headquarters. Prior to the pandemic, the cobblers at pilgrimage centres such as Tirupati and Srikalahasti used to earn a minimum of ₹600 a day. With the slump in business, their numbers have reduced from 80,000 a day to a mere 2,000 in Tirupati.

To augment their palty income, the cobblers also mend umbrellas and school bags, aprat from footwear.

“All educational institutions are closed and business hours have been curtailed . Now, everybody wants to return home after finishing their works before the curfew hours begin. All prefer to buy a new pair of footwear instead of getting the older ones mended. We have no business, but we have to run our families. We are clueless,” says Palani (65), a cobbler at the bus station area in Puttur.

Some cobblers say they are totally dependant on the ration being supplied by the government. “Women in our houses somehow borrow food grains or small amount of cash from the neighborhood. That is how we are surviving. Except for mending footwear, I do not know any other trade,” laments Govindaiah (60) another cobbler from Tirupati.