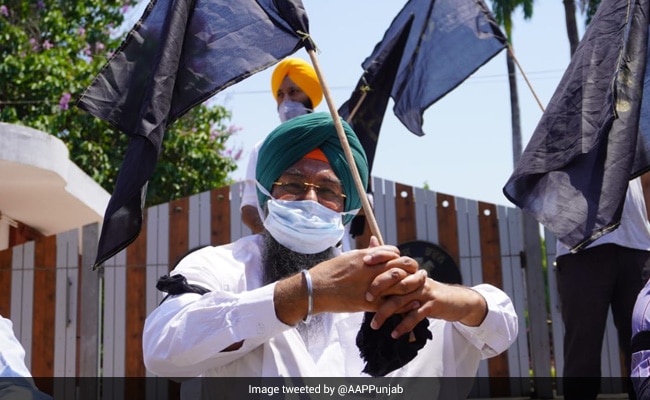 Samkyukt Kisan Morcha had announced that farmers will observe May 26 as “black day”.

Farmers in Punjab and Haryana put up black flags atop their houses, burnt effigies of the central government and held protests on Wednesday, joining a “black day” call given by farmer unions to mark six months of their agitation at Delhi borders against the Centre’s three contentious farm laws.

In Punjab, protesting farmers burnt effigies of the BJP-led government at many places including Amritsar, Muktsar, Moga, Tarn Taran, Sangrur and Bathinda in Punjab.

Several political parties including the Congress, SAD and Aam Aadmi Party (AAP) have extended their support to the farmers’ call of observing the day as “black day”.

The Samkyukt Kisan Morcha (SKM), an umbrella body of protesting unions, had announced that farmers will observe May 26 as “black day” to mark the completion of six months of their protest.

In Punjab, protesting farmers also burnt effigies of the BJP-led government at many places including Amritsar, Muktsar, Moga, Tarn Taran, Sangrur and Bathinda in Punjab.

Farmers, especially youth, put up black flags on their vehicles including tractors, cars and two-wheelers at several places in Punjab to register their protest.

Holding black flags, they shouted slogans against the BJP-led government and sought that the laws be repealed. Later, they were removed from outside the residence of the Punjab governor by the Chandigarh Police.

In Sirsa, a group of farmers holding black flags gathered in large numbers on Barnala road while in Jind farmers with black flags raised slogans against the BJP-led governments at the Centre and the state.

Joining a group of protesters in Ambala, where farmers burnt an effigy of the central government, Mr Chaduni, who wore a black ribbon around his turban said, “Farmers are prepared to end the protest today if the Centre agrees to our demands. At the same time, we are prepared to continue our agitation so long our demands are not fulfilled.”

At many places in Haryana including Ambala, Jind, Kaithal, Hisar and other districts, many farmers put black flags on the top of their houses and on their vehicles.

Haryana Congress president Kumari Selja said that their party stands shoulder-to-shoulder with the farmers and demanded that the Centre should immediately rollback the farm laws.

Congress general secretary Randeep Singh Surjewala said farmers have been agitating for the last six months in cold winter and hot summer months, but Centre has adopted an adamant attitude towards their demands.

The Congress leader said it is due to the hard work of farmers that the country’s food needs are met and there has been record production of foodgrains.

He said the farmers’ struggle will pay off and the “tyrant government” will have to bow before them.

Mr Pandher said their struggle will continue till the three laws are scrapped.

Farmer bodies had appealed to all sections including the labourers, youth, unemployed, traders and shopkeepers to raise black flags at their homes, shops and industrial establishments.

In Phagwara in Punjab, Bharatiya Kisan Union (Doaba) General Secretary Satnam Singh Sahni claimed that shopkeepers and traders put up black flags at their shops in solidarity with farmers.

The SAD chief tweeted, “As #KisanAndolan completes 6 months today, I again urge the Centre to deal compassionately with farmers & repeal the black laws. Have hoisted a #BlackFlag atop my Badal residence today & likewise @Akali_Dal_ leaders & workers have done the same observing #Black_Day_Of_Farmers.”

As #KisanAndolan completes 6 months today, I again urge the Centre to deal compassionately with farmers & repeal the black laws. Have hoisted a #BlackFlag atop my Badal residence today & likewise @Akali_Dal_ leaders & workers have done the same observing #Black_Day_Of_Farmers. pic.twitter.com/HO72LRepXy

While thousands of farmers have been agitating against the farm laws, the central government has maintained the laws are pro-farmer.

Several rounds of talks between farmers and the government have failed to break the deadlock over the three Central legislations.

A government panel had met farmer leaders on January 22. There has been no talks between the two sides since January 26 when the farmers’ tractor rally in the national capital turned violent.

Grandmaster Akshar on prenatal Yoga poses for every trimester