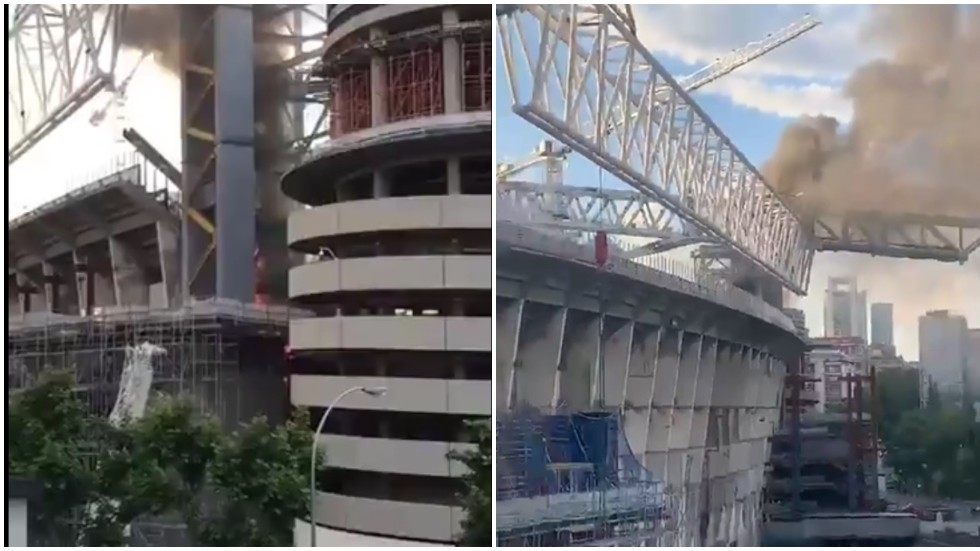 La Liga giant Real Madrid’s Santiago Bernabeu stadium – currently under reconstruction – caught fire on Wednesday with footage of the blaze already being circulated by the Spanish media and online across social media.

MARCA reported it as a “scare” in the renovation of the iconic ground.

And clips show that a small blaze engulfed what appears to be a roofing column near the top of one of the main terraces.

Within minutes of the alarm being raised, local fire services in the Spanish capital were called to the scene to put out the blaze.

As it was not severe, the fire was put out quickly.

But as of yet, it remains unknown what caused the incident.

Set to take a further two-and-a-half years, the reimaging of the Bernabeu will cost a whopping $990 million and is thought by many as one of the motivations behind president Florentino Perez’s desire to join the failed breakaway European Super League.

Since football restarted after lockdown last summer, Los Blancos have played their games at the nearby Alfredo Di Stefano, which was once solely the home of their youth categories.

Real Madrid will not play at the Bernabeu for the rest of the La Liga season, instead completing their home matches at their training venue Alfredo Di Stefano stadium 🏟️This will allow Bernabeu renovations to be fast tracked ⚒️ pic.twitter.com/oZxjHzQ6w6

In Liverpool’s 3-1 loss to the hosts in the first leg of the Champions League quarterfinals recently, Reds boss Jurgen Klopp was heard saying: “This is a training ground. It’s as if we visited Manchester United and played at their training ground.”

“This was strange tonight because it was really difficult with the stadium, but Anfield is at least a proper stadium and it will be good for us,” the German added.

Called “disrespectful” by the ’98 World Cup winner and club legend, Zinedine Zidane insisted “This is our stadium. We play here, and we’re proud to play here at the Estadio Alfredo di Stefano.”

But now with this latest development it remains to be seen whether Madrid’s planned time in it has been extended.