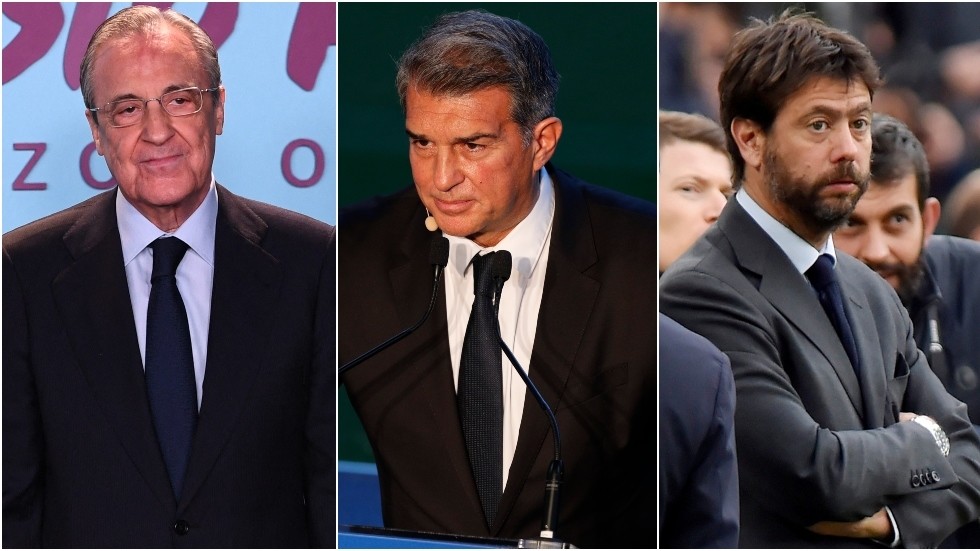 Barcelona, Real Madrid and Juventus have accused UEFA of a “flagrant breach of justice” after the governing body opened disciplinary proceedings against the trio for their refusal to disown the European Super League project.

UEFA announced this week that it was beginning formal action against the trio, who remain the only three clubs to cling to the ill-fated breakaway Super League scheme which lasted just two days before it drowned in a tidal wave of criticism in April.

Despite nine of the other 12 founding members fleeing the project and pledging to UEFA not to undertake similar ventures, Spanish giants Real and Barca and Italian co-conspirators Juve are holding on for dear life – and returned fire in a joint statement against UEFA on Wednesday.

“FC Barcelona, Juventus FC and Real Madrid CF wish to express their absolute rejection of the insistent coercion that UEFA has been maintaining towards three of the most relevant institutions in the history of football,” a statement read.

“This alarming attitude constitutes a flagrant breach of the decision of the courts of justice, which have already made a clear statement warning UEFA to refrain from taking any action that could penalise the founding clubs of the Super League while the legal proceedings are ongoing.

“Therefore, the opening of disciplinary proceedings by UEFA is incomprehensible and is a direct attack against the rule of law that we, the citizens of the European Union, have democratically built up, while constituting a lack of respect toward the authority of the courts of justice themselves.

“From the beginning, the Super League has been promoted with the aim of improving the situation of European football, through permanent dialogue with UEFA and with the objective to increase the interest in the sport and to offer fans the best possible show.

“This objective has to be achieved in a framework of sustainability and solidarity, especially in a precarious economic situation such as the one many clubs in Europe are currently experiencing.”

Also on rt.com As football fans laugh at the thought of a FIFA World Cup every two years, will European Super League-style doomed ideas ever end?

The statement went on to warn – as Real Madrid president Florentino Perez did when launching the ill-fated project – that football must reform or risk a slow, painful death.

“Instead of exploring ways of modernizing football through open dialogue, UEFA expects us to withdraw the ongoing court proceedings that question their monopoly over European football,” it read.

“Barcelona, Juventus and Real Madrid, all of them more than a century old, will not accept any form of coercion or intolerable pressure, while they remain strong in their willingness to debate, respectfully and through dialogue, the urgent solutions that football currently needs.

“Either we reform football or we will have to watch its inevitable downfall.”

The other nine ‘founding members’ of the Super League – including England’s ‘Big Six’ clubs, Atletico Madrid, and Italian duo Inter and AC Milan – escaped largely unscathed from their dalliance with the project, being handed a collective fine of €15 million ($18 million) and seeing their revenues from UEFA competition trimmed by 5% for one season.

Real, Barca and Juve, meanwhile, could face a two-year ban from UEFA competition if they refuse to let go of their Super League dream.

Queen Elizabeth Reminded Me Of My Mother, Says Joe Biden