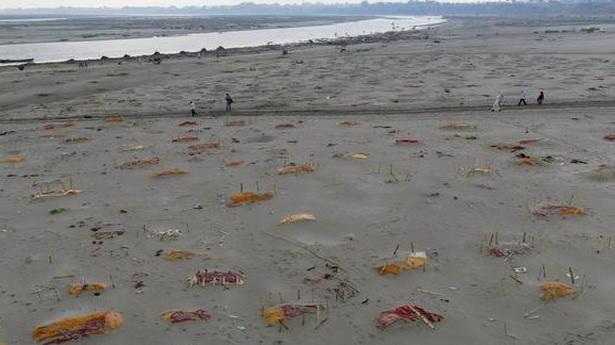 The Prayagraj district administration has ordered a probe into the removal of shrouds from the bodies buried in the sand on the ghats of the Ganga, days after it was reported that the bodies could be of suspected COVID-19 victims.

A two-member committe of ADM (administration) and ASP (Gangapur) Prayagraj would probe the matter.

The panel has been asked to probe all angles, including which “elements” were involved in the act of removing the shrouds from the graves and what was their intention.

The panel has also been asked to take appropriate legal action against those found guilty.

Visuals widely shared on social media had shown cleaners, allegedly deployed by the administration, removing the shrouds, many of them bearing the name of Lord Ram, and the wooden stubs from the mounds of sand at Shringverpur Ghat.

A senior official, however, claimed that only shrouds that were scattered on the ghat were being removed while those on mounds of sand where the bodies were buried were not touched.

“We are only cleaning the dirty clothes and shrouds that people leave behind or abandon on the side of the ghats,” Soraon Sub-Divisional Magistrate Anil Kumar Chaturvedi told The Hindu on Tuesday.

Webinar on COVID-19 and cardiac care

How mobile, smartwatch data forced a man to admit that he killed his wife

Will ‘do everything’ to contribute to a better future for all: Guterres

Our playing XI was picked taking conditions out of equation: R Sridhar