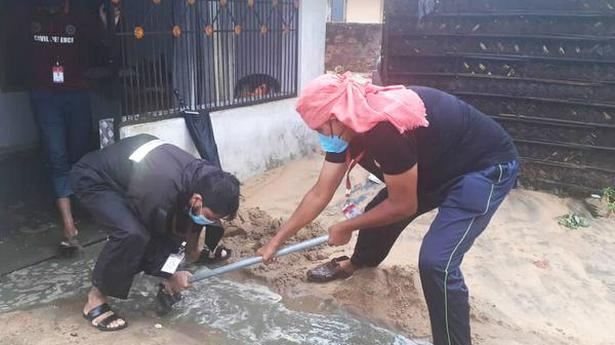 The COVID-19 case graph seems to be stabilising in Kozhikode district, and the daily test positivity rate (TPR) too is on the decline. As many as 1,521 people tested positive for the virus on Thursday, and the daily TPR was 13.66%.

According to the District Medical Officer, 11,436 samples were tested. There were 1,505 cases of local transmission, and the source of 15 others is not known. The Kozhikode Corporation accounted for 343 cases of locally acquired infections, Maniyoor and Vadakara 53 each, Koduvally 52, and Chorod and Karassery 38 each. As many as 2,316 people recovered from the infection, and 22,237 are under treatment. A total of 17,514 are in home isolation.

Elavally and Engandiyur panchayats recorded TPR of 56.03% and 51.35% respectively. There are 14,109 active cases in the district, and 93 people from the district are undergoing treatment in other districts. So far, 2,14,075 people have recovered.

Meanwhile, 1,920 people, including eight health workers, contracted the infection through local transmission on Thursday. Of them, 292 are above the age of 60 and 187 are below the age of 10. In all, 8,418 people are in home quarantine. As many as 10,261 samples were taken for test on Thursday.

(With inputs from Thrissur bureau)