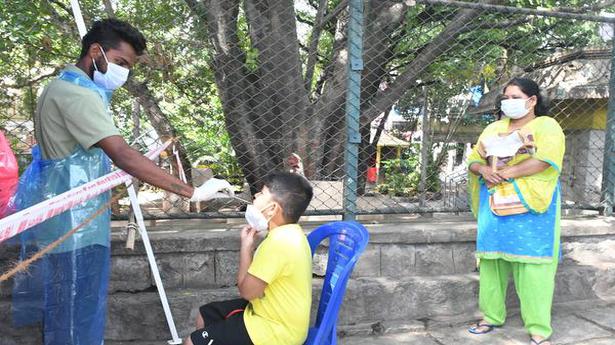 Expert says there is always a lag period of two to three weeks after decline in daily infections and positivity rate for the CFR to come down.

Even though the number of fresh COVID-19 infections and the positivity rate has begun showing a marked decline in Karnataka over the last few days, there appears to be no such respite in case fatality rate (CFR).

However, the daily tally of deaths due to COVID-19 continues to mount. The CFR, which remained less than 1% on most days during April, went up from the first week of May before crossing the 2% mark last Sunday (May 23) when it reached a staggering 2.4%. As many as 626 COVID-19 deaths were reported in the State on May 23, the highest so far.

Director of Jayadeva Institute of Cardiology C. N. Manjunath, who is also the nodal officer for laboratories and testing in the State’s COVID-19 Task Force, said there is always a “lag period” of two to three weeks after decline in daily infections and positivity rate for the CFR to come down.

He attributed the increase in CFR to the mortality of accumulated sick persons, who had been hospitalised for more than ten days.

Dr. Manjunath said the decline in new infections and positivity in large cities such as Bengaluru will be followed by a corresponding decline even in districts and rural parts of the State after a gap of two to three weeks.

When asked if there would be a need for extending the lockdown in the State, Dr. Manjunath felt that the June 7 deadline would be enough provided the restrictions on gathering of people for social-, political- or religious purposes remain in place for another six months while ramping up the vaccination process.

Sharib Hashmi says he’s on ‘cloud nine’ as the response on The Family Man 2 has been ‘crazy’; Deets inside