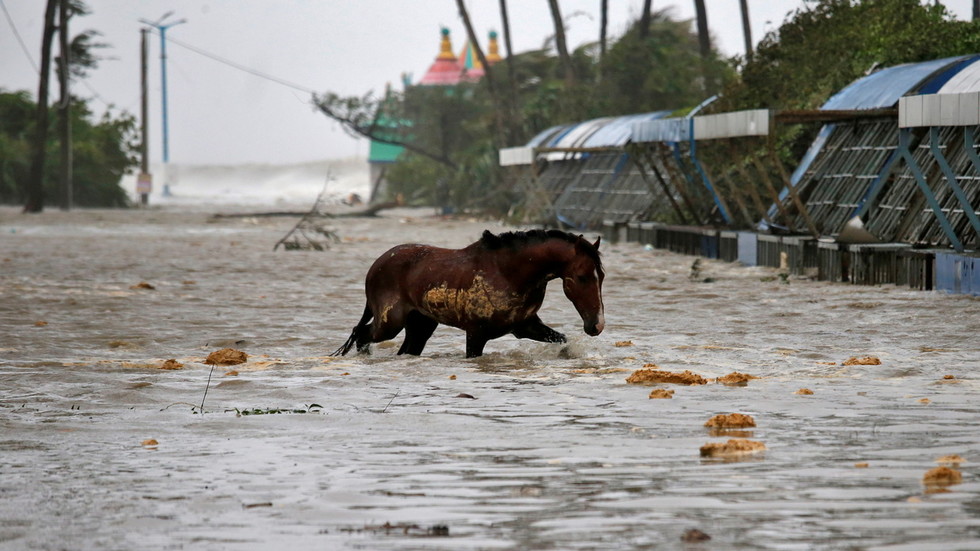 Although many villages in India and Bangladesh have been cut off by the floods and high tides caused by powerful Cyclone Yaas, the storm itself is showing signs of weakening as it moves into India’s territory.

Cyclone Yaas is weakening into a deep depression as it drives inland into the Indian state of Jharkhand, according to the India Meteorological Department. The bad weather has reached far into the sub-continent, with high winds and rain experienced even in Nepal.

The eastern Indian coastal state of Odisha bore the brunt on Wednesday, and the state of West Bengal and neighboring Bangladesh felt the wrath of Yaas, too. Apart from pouring rain, the cyclone whipped up extremely high waves that flooded multiple areas along the coast.

“I have never seen a tidal surge rising to this level. It flooded many villages and washed away houses. Many people are marooned,” Humayum Kabir, an official in the Bangladeshi coastal district of Khulna, told Reuters.

In Odisha alone, at least 124 villages along the coast were flooded. The authorities have dispatched relief workers and aid to the affected locations, according to Suresh Mohapatra, the chief secretary of the state.

Despite mass evacuation efforts, the cyclone killed some 10 people in Bangladesh and India. More than 15 million people were evacuated from the most vulnerable areas of Odisha before it hit. The death toll is likely to rise, however, as numerous areas have been cut off and communications disrupted, preventing the accurate collection of data.

The cyclone has inflicted heavy damage along the coast, with at least 300,000 homes damaged or destroyed by the extreme weather. Footage from the scene showed people rummaging through the rubble to salvage what was left of their belongings.

The arrival of Cyclone Yass comes less than two weeks after India’s western coasts were battered by Super Cyclone Tauktae. The extreme weather event killed at least 155 people and inflicted heavy damage, with losses estimated at least at $2.1 billion.