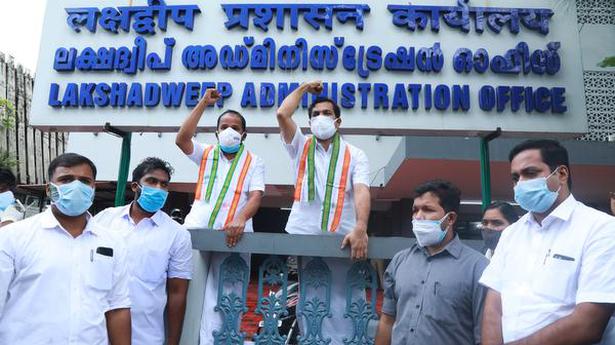 A draft law called Prevention of Anti-Social Activities has also raised eyebrows, given that the archipelago has the lowest crime rate among States/U.T.s

A series of controversial orders issued by Lakshadweep’s administrator Praful Khoda Patel has sparked widespread criticism. Regulations that have been introduced are perceived to be a threat to the cultural identity of the inhabitants and the sensitive ecology of the region. The draft notification for the creation of the Lakshadweep Development Authority, which makes provision “for acquisition and development of land for planning”, is widely opposed by the islanders, 94.8% of whom are Scheduled Tribes, given that 97% of the Union Territory’s land is under forest/tree cover. A draft regulation that penalises selling or buying beef products has come under heavy criticism given that 64.8% of the population consume beef.

A draft law called Prevention of Anti-Social Activities has raised eyebrows, given that the archipelago has the lowest crime rate among States. The move to lift the restriction on use of alcohol was also decried given that Lakshadweep has the lowest alcohol use in India.

How to read the charts

Each circle corresponds to a State/ UT, with Lakshadweep highlighted in a darker shade. The data are sourced from the Census, Niti Aayog, NSO 68th round, NFHS-4, NCRB, and the RBI.

Lakshadweep has the highest ST population (94.8%).

Around 97% of the land in region is covered by forest or trees, the highest in India.

Over 96.5% of the population is Muslim, the highest in India.

As many as 65% inhabitants consume beef, the second-highest in India.

Only about 7% of men consumed alcohol, the lowest in India

Population living below the poverty line (2011-12)

About 3% of people in the region were living below the national poverty line, the second lowest in India.