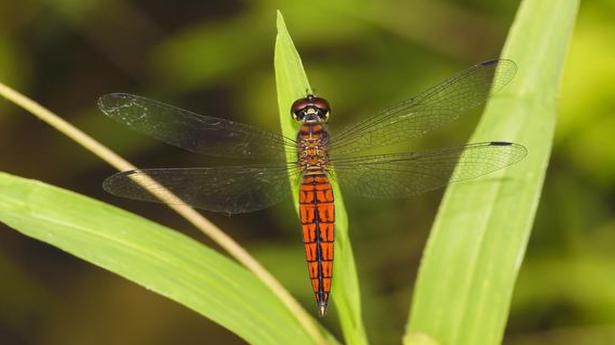 The life cycle of colourful and diminutive Little Bloodtail, or Lyriothemis acigastra, is tied to southwest monsoon

Sightings of Little Bloodtail, or Lyriothemis acigastra, a small, colourful and elusive dragonfly whose life cycle is tied to the southwest monsoon, had been widely recorded from the State.

Large numbers of the dragonfly are known to emerge from aquatic larval stage with the first rains of June. They disappear as the southwest monsoon wanes by September.

In 2015, a colony of this species of dragonfly was discovered by Jeevan Jose from Kadavoor village in Ernakulam. Over the years, dragonfly enthusiasts have sighted it from various locations across the State.

Over a span of six years, Little Bloodtail had been spotted from Kasaragod, Kannur, Ernakulam, Kottayam and Idukki. Dragonfly enthusiasts have recorded the observations in the Facebook group ‘Dragonflies of Kerala’. A note on their behaviour, ecology and distribution in the State was published in the May 2021 issue of Journal of Threatened Taxa.

Historically, the species was known to be found in Tibet, Myanmar, Bangladesh and northeast India, but was first spotted in the State only in 2013 at a few locations in Kannur district. The diminutive insect measures less than 4 cm in length, and the male is blood-red in colour with black marks. In the female of the species, the red is replaced with yellow. The wings are transparent.

“It remains a mystery how the eggs or larvae of this species survive the dry period as the irrigation canals of Kadavoor, in which it was observed laying eggs, run dry by January,” says Muhamed Sherif who compiled the observations of the Little Bloodtail.

“This dragonfly appears to show high microhabitat specificity, laying eggs in stagnant or semi-stagnant water bodies with good algal cover. It shuns bright sunlight, preferring to feed in the evenings or on overcast days,” says Vivek Chandran, a researcher who was part of the study.

The research team is part of the Society for Odonate Studies (SOS), an NGO formed for the study and conservation of dragonflies and damselflies in the State. SOS is hopeful of finding the Little Bloodtail from more localities in the coming days in the State.

Dragonflies and damselflies are indicators of environmental health, and their diet primarily consists of mosquitoes and agricultural pests, thus calling for their conservation, says Mr. Chandran.