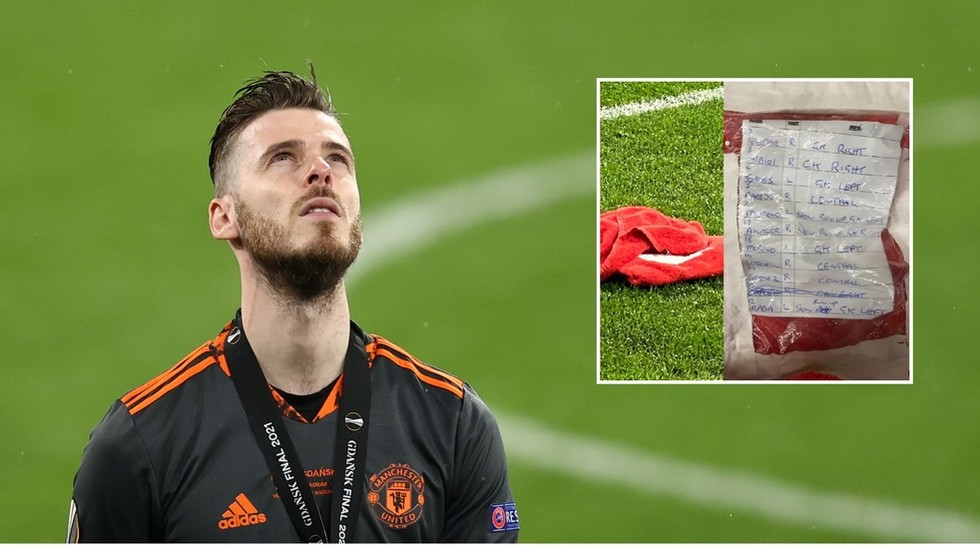 David de Gea has been accused of “ignoring” a crucial note which could have handed Manchester United victory in their Europa League penalty shootout with Villarreal, but those claims overlook other aspects of the spot-kick drama.

The Europa League showpiece in Gdansk on Wednesday night went to a shootout after United and their Spanish opposition remained locked at 1-1 following extra time, after a 29th-minute goal from Gerard Moreno was canceled out by a second-half finish from Edinson Cavani.

The ensuing penalty contest was one of the most remarkable ever seen in a European final as all 20 outfield players stepped up to score, leaving the respective goalkeepers to potentially settle the game.

Villarreal ‘keeper Geronimo Rulli blasted his effort into the top corner beyond the reach of De Gea, then dived to his left to save the Spaniard’s own effort to give the Yellow Submarine a first ever major title in their 98-year history.

According to some in the UK press, things could have been different had Spain international De Gea paid more heed to the notes he was reportedly given before the shootout.

A photo shared by Sky Sports journalist Angelo Mangiante showed a breakdown of Villarreal names and their preferred penalty placings.

A penalty honed in on by the likes of The Mirror is the first one taken in sudden death by Villarreal, after both teams had buried their first five efforts.

De Gea’s notes stated that Villarreal’s Moi Gomez would send his effort down the middle (video here) – which he duly did, only for the United ‘keeper to dive to his left and see the ball sail past him into the net.

Fred stepped up next to score for United, which – so the story goes – could have ended up being the winner for his team if De Gea had done his job properly.

However, by that stage the notes had largely gone out of the window anyway, as several Villarreal players had gone different ways to what was written and De Gea had failed to keep their efforts out, regardless of following the plan or not.

For example, De Gea followed instructions for the first two takers – Gerard Moreno and Dani Raba – only for both men to send the ball the opposite way.

De Gea also stuck to the plan for Paco Alcacer, who sent the ball to De Gea’s right – the same way as noted – but the Spaniard couldn’t get a hand on it.

Villrreal’s Alberto Moreno also went the same way as indicated – on that occasion to De Gea’s left – but placed his effort tightly into the corner and out of the goalkeeper’s reach, despite the fact he again guessed the right way.

The next Villarreal taker, Dani Parejo, was noted as going centrally with his kicks, but opted to go to De Gea’s right.

The Spanish goalie guessed correctly but was again too slow to keep the keep the ball out.

Then came Gomez and the spot-kick for which De Gea has been accused of failing to follow the plan.

In reality, three of the previous five penalty takers hadn’t followed what was written, and even when De Gea had gone with the instructions or guessed correctly otherwise, he’d been unable to stop them.

A similar story played out for the remainder of the shootout.

While the quality of penalties from both sides was, for the most part, remarkably high, De Gea’s alarming inability to keep out spot-kicks of any kind should be far more the focus.

“The penalties, you have to say… David… we spoke about his record before it, he didn’t look like saving a penalty,” United midfield icon Paul Scholes would later say from studio.

In fact, such is De Gea’s shocking record at stopping spot-kicks, he has now failed with the last 40 efforts in a row he’s faced.

“Doesn’t matter if he went the right way on all of them anyway, the ball still would’ve still gone through him,” wrote one fan scathingly.

40 – David de Gea hasn’t saved any of the last 40 penalties he’s faced for club & country (incl. shootouts), last saving one in April 2016 from Romelu Lukaku. Bystander. #MUFC@oilysailor looks back at the #UELFinal for @OptaAnalyst. ⬇️

Doesn’t matter if he went the right way on all of them anyway, the ball still would’ve still gone through him

Manager Solskjaer was quizzed on why he didn’t bring on substitute goalkeeper Dean Henderson – who has a much better record at keeping out spot-kicks – just before the shootout.

“It had crossed my mind in the build-up to the game but we were confident in David and we’d prepared,” the Norwegian would explain.

“But anything can happen in a penalty shootout, so I stuck with the keeper who had played all of the game.”

The incredible conclusion in Gdansk meant United have now gone four full seasons since they last lifted silverware – with their Europa League victory against Ajax with Jose Mourinho in 2017 being their last triumph.

Watching from the stands was Sir Alex Ferguson, who was seen consoling De Gea after his penalty misery, but questions will no doubt be asked as to whether the Spaniard – the club’s highest-paid player on a reported £375,000 a week – should be their number one choice next season as he enters the last two years of his contract.