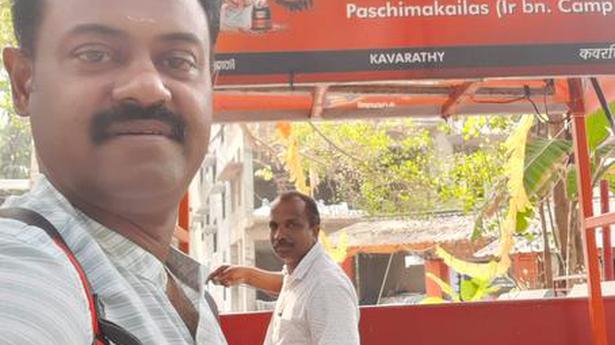 He says the beautiful temple on the islands, which have 99% Muslim population, shows the large-heartedness and camaraderie of the people

At a time when Lakshadweep is in news, a Facebook post by a Health Department staff from Kerala on a temple in Kavaratti has gone viral in the social media.

Adarsh Viswanath, an avid traveller, had visited the islands in January last year. “I was amused to see a Siva temple with a large banyan tree. The islanders with whom I was staying encouraged me to visit the place,” he told The Hindu.

Mr. Viswanath had written in the post: “Don’t be surprised, this calm and beautiful temple is situated in Lakshadweep, which has 99% Muslim population. It is more spacious than some of the mosques on the island.”

Those who have “99% majority” on the Lakshadweep Islands never felt like encroaching upon or demolishing this space. That shows the large-heartedness and camaraderie of the islanders, who hold the 1% population together with them, Mr. Viswanath wrote. Those who claim that the island is “full of Islamic State terrorists” should visit there once to feel their love and affection, he added.

The post was accompanied by a picture of the entrance to the temple. The name board is written in English, Malayalam, and Hindi. He got 19,000 likes and 25,000 shares soon.

During his five-day trip to the island, Mr. Viswanath had spoken about the Kerala model of hygiene and sanitation at sessions organised by local officials.

He is employed as a junior health inspector in Kollam district.

Trade analysts remember Sushant Singh Rajput: ‘He was growing at the box office, no doubts on that’