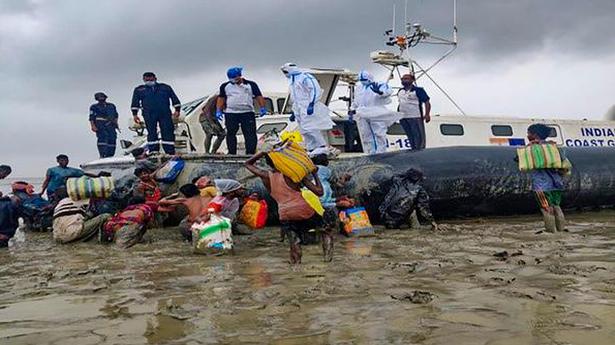 A select list of stories to read before you start your day.

Antibody dependent enhancement (ADE), when antibodies to an infection can sometimes aggravate infection or trigger a respiratory disease, is something that vaccine developers must watch out for. However, there is no scientific case that such ADE may actually trigger newer virus variants, says experts.

Prime Minister Narendra Modi completes seven years in the top job of the country this week amidst what he himself has termed a “once in a century pandemic”. In the midst of the deadly second wave of COVID-19, his party, the BJP, despite investing much political capital in the West Bengal Assembly polls, lost to the Trinamool Congress.

The ‘Very Severe Cyclonic Storm’ Yaas that made landfall south of Balasore in Odisha on Wednesday tore into the bordering regions of West Bengal and Odisha and weakened into a cyclonic storm, leaving behind a trail of destruction in its wake on the eastern coast.

The Ministry of Electronics and Information Technology (MeitY) has written to all significant social media intermediaries — who have over 50 lakh registered users in the country, requesting details of compliance with the new guidelines that came into effect on Wednesday, despite several requests of extension from the industry.

The government on Wednesday said it respects the right to privacy and the requirement of tracing origin of flagged messages under the new IT rules is for prevention and investigation of “very serious offences” related to the sovereignty of India or public order.

U.S. President Joe Biden is reportedly preparing to name Los Angeles Mayor Eric Garcetti as the next Ambassador to India. Mr Garcetti is a long-time political ally of the President. News of his imminent nomination was reported by Axios, which had, earlier in May, reported that Mr. Garcetti was being considered for the New Delhi job.

Over the past year, the global gaming industry has mammothed the mainstream film industry, leading to a growing focus on design alongside the launches of next-gen consoles Xbox Series X/S and PlayStation 5, ushering in a groundswell of games such as Assassin’s Creed Valhalla, Outriders, Doom Eternal and Cyberpunk 2077.

Controversial Pakistan batsman Umar Akmal has paid a hefty fine of 4.5 million rupees to PCB, which now entitles him to join the Anti-Corruption rehabilitation program of the board. A source in the PCB confirmed that Akmal had deposited the fine imposed on him by the Court of Arbitration for Sports (CAS) in February while disposing off cases filed by the batsman and the PCB.

A defiant President Alexander Lukashenko on Wednesday defended Belarus’s diversion of a European flight and arrest of a dissident on board, lashing out at critics at home and abroad.

Nationwide demonstrations were held by farmers on Wednesday burning the effigies of the Modi government and hoisting black flags on their rooftops and vehicles to mark six months of their sit-in at Delhi borders seeking withdrawal of three farms laws and guarantee for minimum support price.

The Supreme Court has held that an arbitral award can be challenged only if it is perverse or erroneous in law. An award based on an alternative and reasonable interpretation of the law does not make it perverse.

In India’s pandemic, the rich buy luxury cars and the poor lose their homes