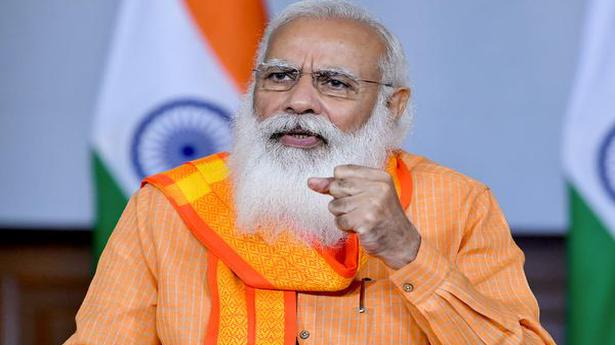 PM Narendra Modi said that National Digital Health Mission will bring ease of living for citizens as they can avail a large number of health services via it.

Chairing a high-level meeting on Thursday to review the National Digital Health Mission, Prime Minister Narendra Modi said that it will bring ease of living for citizens as they can avail a large number of health services via it.

The PMO said Mr. Modi directed that steps be expedited to expand operations under the NDHM, noting that the platform’s utility to the citizens will be visible only by way of enabling them across the country to avail of services such as tele-consultation with a doctor, availing services of a lab, transferring test reports or health records digitally to the doctor and paying digitally.

He asked the National Health Authority, the Ministry of Health and the Ministry of Electronics & IT to coordinate efforts in this direction. Mr. Modi had announced the launch of NDHM during his Independence Day address in 2020.

“Since then, the digital modules and registries have been developed and the mission has been rolled out in six Union Territories. So far, nearly 11.9 lakh Health IDs have been generated and 3,106 doctors and 1,490 facilities have registered on the platform,” the PMO said.

It has been envisaged that Unified Health Interface (UHI) – an open and interoperable IT network for digital health – should soon be rolled out, it said.

This interface will enable public and private solutions and apps to plug in and be a part of the national digital health ecosystem.

It will allow users to search, book and avail necessary healthcare services such as tele-consultations or laboratory tests, the PMO said, adding that the system will ensure that only verified healthcare providers join the ecosystem.

This is likely to unleash a “digital health tech revolution” with innovations and various services for citizens in such a manner that healthcare infrastructure and human resources can also be utilised in a more efficient manner across the nation, it said.

In the meeting, the PMO said, the concept of UPI e-Voucher developed by National Payment Corporation of India (NPCI) was also discussed.

This digital payment option will enable financial transactions linked to specific purpose which can be used only by the intended user. It can be useful for targeted and efficient delivery of various government schemes and an immediate use cases of UPI e-Voucher could be healthcare services, it said.