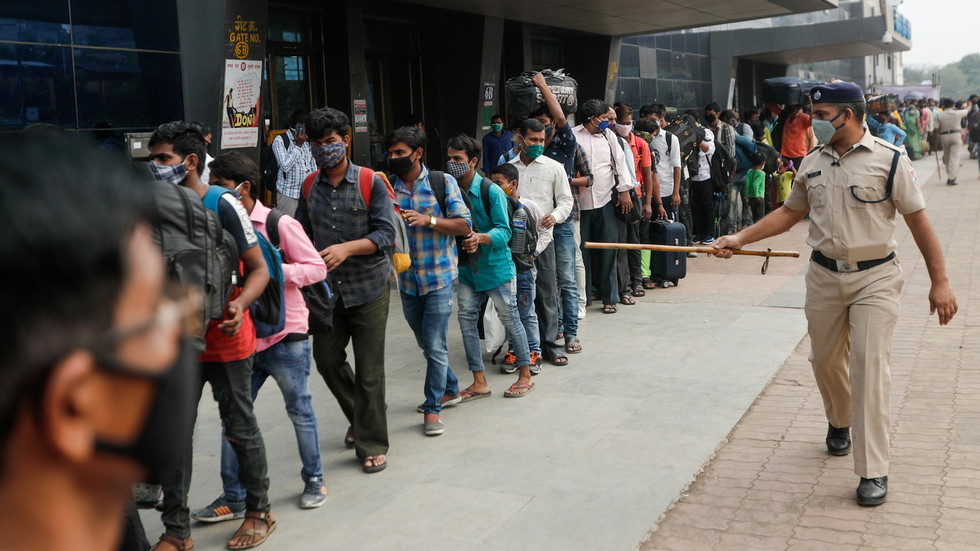 An Indian man in Uttar Pradesh has shocked locals after showing off a massive nail protruding from his hand, claiming the cops doled out the biblical punishment after he was spotted without a mask. Police say the man is lying.

A resident of the city of Bareilly, the 28-year-old man was seen with a large nail sticking out of his hand in a video making the rounds on Facebook and Twitter on Wednesday. The man’s mother told local media he was taken into custody after a scuffle with police, who were on patrol to enforce compliance with a national mask mandate.

Did the cops at Bariley’s Baradari police station really hammer nails into this person’s body for not wearing a mask.?@Uppolice — do you have an explaination? pic.twitter.com/yJfHYD9mTn

The woman claims that she spent hours searching for her son, eventually finding him with his hands and feet nailed. She also alleges that officers threatened to re-arrest the man after she complained at the local police station.

A gruesome incident has come to the fore where a mother hailing from UP’s Bareilly alleged that three cops nailed the hands and feet of her son who was seen without a mask.https://t.co/aMWJZM9WTm

The police tell a different story, however, insisting the man leveled the allegations to “escape charges” he previously faced, with Senior Superintendent of Police Rohit Sajwan telling media outlets that his claims are “incorrect.”

Bareilly:Man accuses police of hammering nails into his hand&foot for violating COVID restrictionsCharges levelled by him not true. FIR registered against him for not wearing mask on May24. He has done all this to save himself. He went to jail in ’19 for damaging an idol:Police pic.twitter.com/Neysv1zSJH

While the Bareilly police initially said they launched an investigation to probe potential misconduct, they now claim that the man confessed to faking the brutal punishment “to avoid arrest,” posting a video filmed in the 28-year-old’s hospital room early on Thursday morning.

It is unclear whether the man and his mother will continue to press the accusation once he’s out of the hospital, nail-free.

While India has entered an especially difficult phase of its Covid-19 outbreak – seeing hundreds of thousands of new infections each day, as well as tight government restrictions and a heavily enforced mask mandate – Uttar Pradesh has noted a major drop in cases in recent weeks. The state’s daily positivity rate was below one percent on Tuesday, according to the Hindustan Times.

Nonetheless, police officers have continued to dole out severe penalties in their fight against the virus. The Bareilly man is not the first to charge police brutality linked to the enforcement of India’s Covid restrictions, with several previous cases making national – and international – headlines.

Last month, a 35-year-old man in Madhya Pradesh was allegedly brutalized by two officers for not wearing his face covering properly as he drove his rickshaw to visit his father in the hospital. A viral video showed the man being beaten in the middle of a busy street, as his child wailed in terror throughout the encounter.

Elsewhere, police were seen ‘duck-marching’ hapless suspects down the street for flouting the mask mandate – similar to a practice seen in neighboring Pakistan – in addition to other alleged cases of humiliation and brutality meted out to Covid rule-breakers.