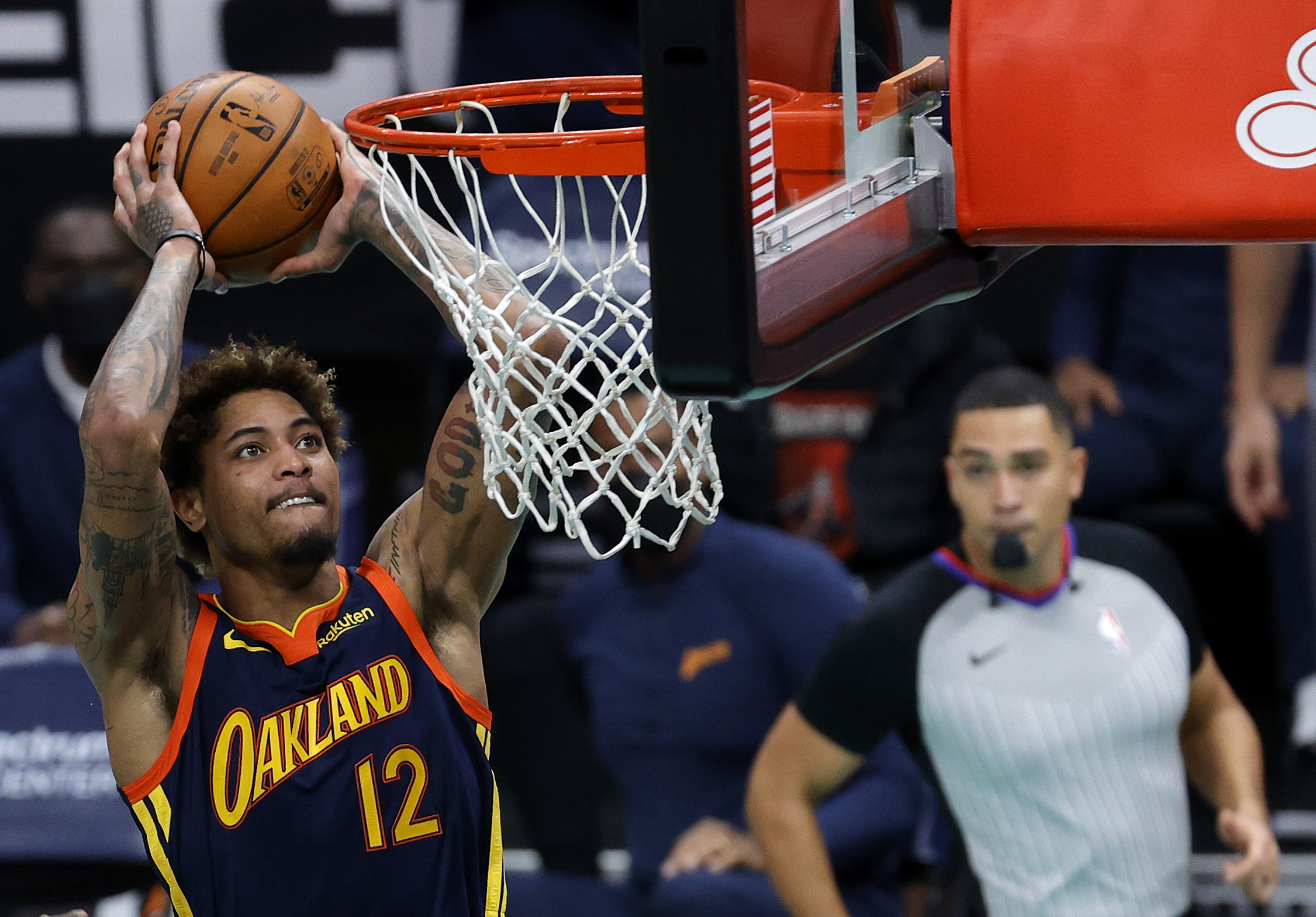 On the latest edition of the HoopsHype podcast, host Michael Scotto is joined by one of the top free agents on the market this summer, Kelly Oubre Jr. The two discussed Oubre’s six seasons in the league so far, what he’s looking for in free agency, how long he wants to play in the NBA, and more.

This episode is brought to you by Sports Business Classroom. If you’re looking to jump-start your career in the business of basketball, you can sign up for classes from August 9-14th and learn from the experts on topics like the salary cap, scouting, analytics, media, and broadcasting.

For more interviews with players, coaches, and media members, be sure to like and subscribe to the HoopsHype podcast on Spotify, Apple Podcasts, and anywhere else you listen to podcasts. Listen to the podcast above or check out some snippets of the conversation in a transcribed version below.

:50 It seemed like you were starting to come into your own in Phoenix as a player. What did you make of your time there during those two seasons?

Oubre: It was the elevation like the way my career is going. It’s just constantly getting better each year. When I got traded to Phoenix from DC, that was an opportunity for me to step into a bigger role, and I thrived in that. It’s something that I’m ready for, and I’ve shown that I’m just ready to continuously keep that consistent with my leadership skills, everything else, and all the analytics that follow behind it.

1:50 Do you remember how you felt when you were traded to Phoenix? 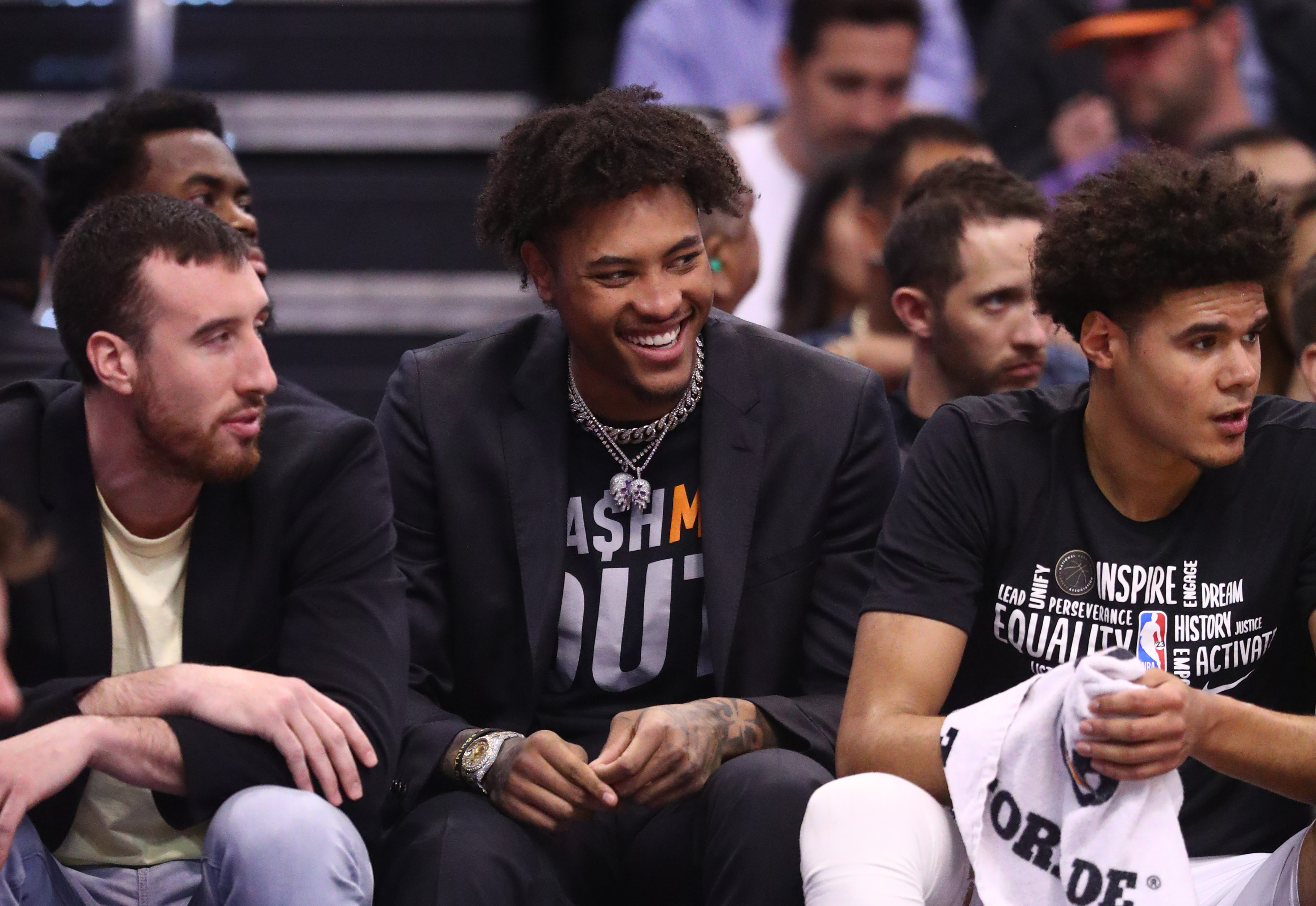 Oubre: It was an experience because that was my first time getting traded, so I had to handle my emotions. Obviously, it was a little bit sad, but I also couldn’t really see past the moment I was in at that point in my life. I didn’t know the situation was definitely going to work out in my benefit and a lot more than I thought in that moment. I was a part of my first business transaction as a young NBA player. I think that it was a learning experience for me, but at the end of the day, it really introduced me to the business side of basketball, which I’m all for now.

3:20 Then you go from Phoenix to OKC and then Golden State. What were your thoughts on your past season in Golden State?

Oubre: I was coming from a place where the culture was steadily forming. It was a young squad with a lot of youth and energy. A lot of untapped potential within that Phoenix squad that was only two years ago. To go to an organization like the Warriors, who already had a culture already set and they already pretty much are used to doing things how they’ve been doing things for the past years that’s worked for them. It was a different change for me to come to a different culture that was already set. It takes some time to get used to people and to know people. To try to force and rush that process, it kind of makes it a little inorganic a bit. That’s what you have to do in a short time in this league to pretty much prove yourself to stay longer. It’s all about getting that nod to be around for a very long time. I tried to soak up as much knowledge from those guys as possible. I think that it helped me in my leadership skills, even though my role was decreased this past season. I feel like I learned a lot more of how to be a leader on the team.

5:05 Did you ever think when you were acquired by OKC that you’d be there before being traded to Golden State?

Oubre: Everything was a blur for me at that time. I was traded to OKC but then pretty much told to just stand put. I was going to go someplace else. I had to brace myself for whatever and not have any expectations about where I thought I was going to go at the moment. It was another experience for me to learn from because it just resembled draft night a little bit with me not knowing where I was going to go for a bit and my fate being in somebody else’s hands. It brings upon a lot of questions in your mind of where are you going to go? It was a big experience for me to learn from and get through, which made me stronger and who I am today.

7:03 Now, you’re going to decide your future as a free agent. What are you looking for in free agency? 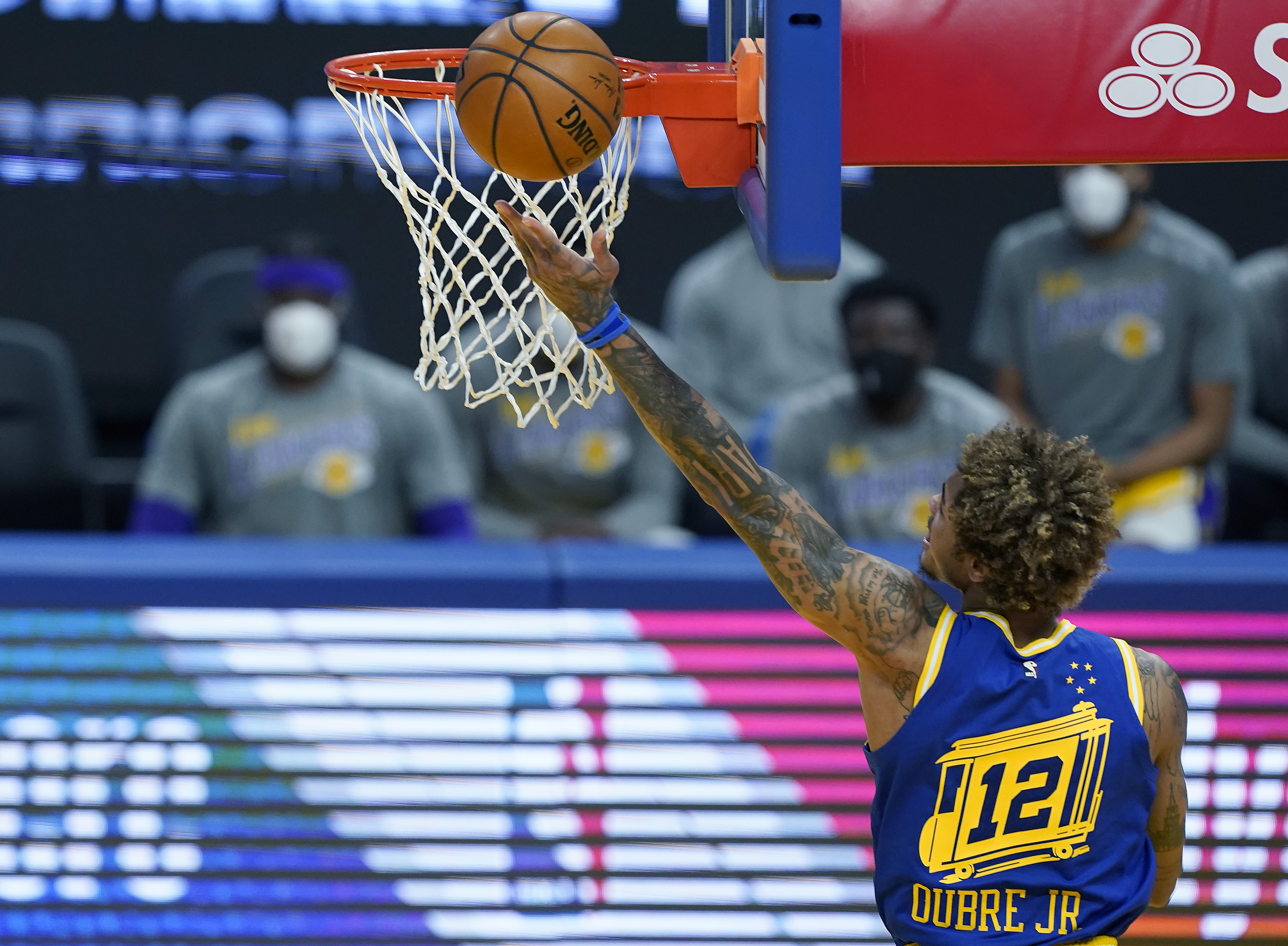 Oubre: I’m really just looking to make the best decision with my team and my family, that’s best for us. Obviously, I want to be a leader, and I want to continue to expand my game, grow and spread my wings. I want to continue to show all the things I’m capable of and not be put in a box. I felt like the universe was trying to put me in a box last year. It’s something that always clashes because it’s a big deal whenever I’m trying to be put in a box because I can’t be put in a box. I’m goiny to continue to show you and prove to you why you shouldn’t put me in a box. I think that just fueled me to work harder this summer and to come back next year and be a better all-around player. As far as the business side, I can’t control that. All I can do is wait for August to roll around with my team and us to really handle the business side. I just want to go somewhere that I can spread my wings and continue to grow and be a focal point in the culture.

8:50 How do you approach free agency differently now than when you signed with the Suns in 2019?

Oubre: It’s a longevity game. I’m here to stay. I’ve proven that I’m rock solid in my approach to the game. I’m going to continuously get better. People know what to expect from me. The attributes that I bring every team can benefit from. I just feel like I’m one of the top-tier two-way styles of play into the game like it was before. I’m going to continuously get better and honing in on that. I think I bring a better skill set and three-dimensional way of thinking to the situation this summer because it’s a bigger summer for me because I’m unrestricted and before I was restricted. I had a little bit less leniency to make decisions. Now, fate is in my hands. I won’t take that for granted.

10:18 What type of system are you best suited to play in to maximize your potential?

Oubre: A highly emphasized defensive culture. A championship-winning culture. Being able to emphasize turning defense into offense and team basketball. A spread open floor, size, versatility. Things like that. I don’t know who that may be, but there are a lot of organizations out there that are going in that direction, so I think I can seamlessly fit into any one of those.

11:13 What have you been working on with your trainer Drew Hanlen this summer to improve?

Oubre: I’m taking it back to my fundamentals and back to the basics. More so working on my handles, my ball pickup, shooting a lot of reps from three and mid-range. A lot of fades and mid-range work. Me creating and getting to my spots. For me, I have the tools. It’s just about connecting my mind and my body together, and making it more effective in the game, and making the right reads. Working on my overall game, but it’s the basic fundamentals that’ll carry me for the long run.

12:50 What separates you from the other free agents available this summer? 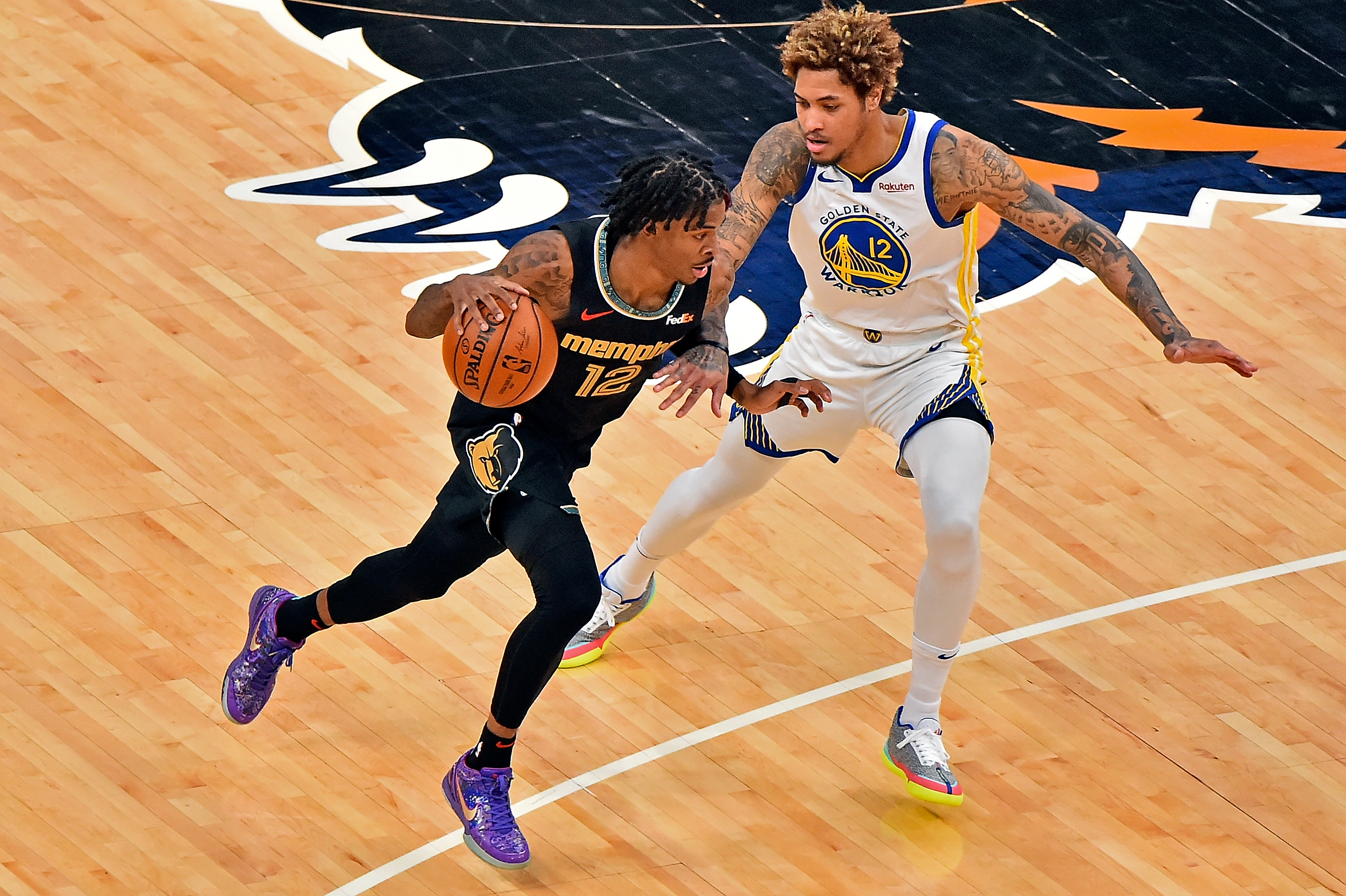 Oubre: I’d say my youth, my two-way ability on offense and defense. I’m not one-dimensional. Passion. Leadership skills. I’m a consummate professional. I come in and do my work with a smile on my face each and every day. I’m a winner. Those are things I’d say off the top of my head about me that I bring to an organization.

13:33 What have you thought of your career so far in six seasons?

Oubre: I really had no expectations because at the end of the day, I never was given anything on a silver platter. I’ve had to work for each and every thing I’ve gotten in my life. Everything I’ve done up until this point, I’ve earned it. I like it that way. I could be here right now in my career and have some accolades that were kind of handed to me a little bit, but that’s not the case. I’m going to continue to work and prove my worth in each and every way possible by the work that I put in. I’m going to continue to be myself. I love how this game never changed me and will never change me. Just remaining humble and appreciative of the life that I live. I get to play basketball for a living. I don’t ever take that for granted.

15:00 As you enter the prime years of your career, what do you hope to accomplish going forward?

Oubre: Just continue to get better. Keep the same routine of getting better each and every year and allowing my game to expand, my numbers to grow, and just doing it humbly within the confines of the offense and the organization I’m in. I definitely want to have all the individual accolades under my belt. That only comes with one day at a time. I can only continue to get better today for tomorrow.

Oubre: I really would love to be 15-20 (years). That’s ideal. That’s a dream of mine for sure. Just to be around this league until I pretty much can’t anymore. That’s the goal.

16:19 What do you think you’ll do after you hang up your sneakers and retire one day?

Oubre: I’m an artist, so I definitely plan on doing something in the arts field. What that may be, I’m not sure yet. I have my own business and LLCs set up for me to transition after I finish playing basketball into those fields. Right now, I’m just focused on playing the game that I love.

16:55 How was Monty Williams behind the scenes and seeing the Suns reach the Finals after being traded in the Chris Paul deal? 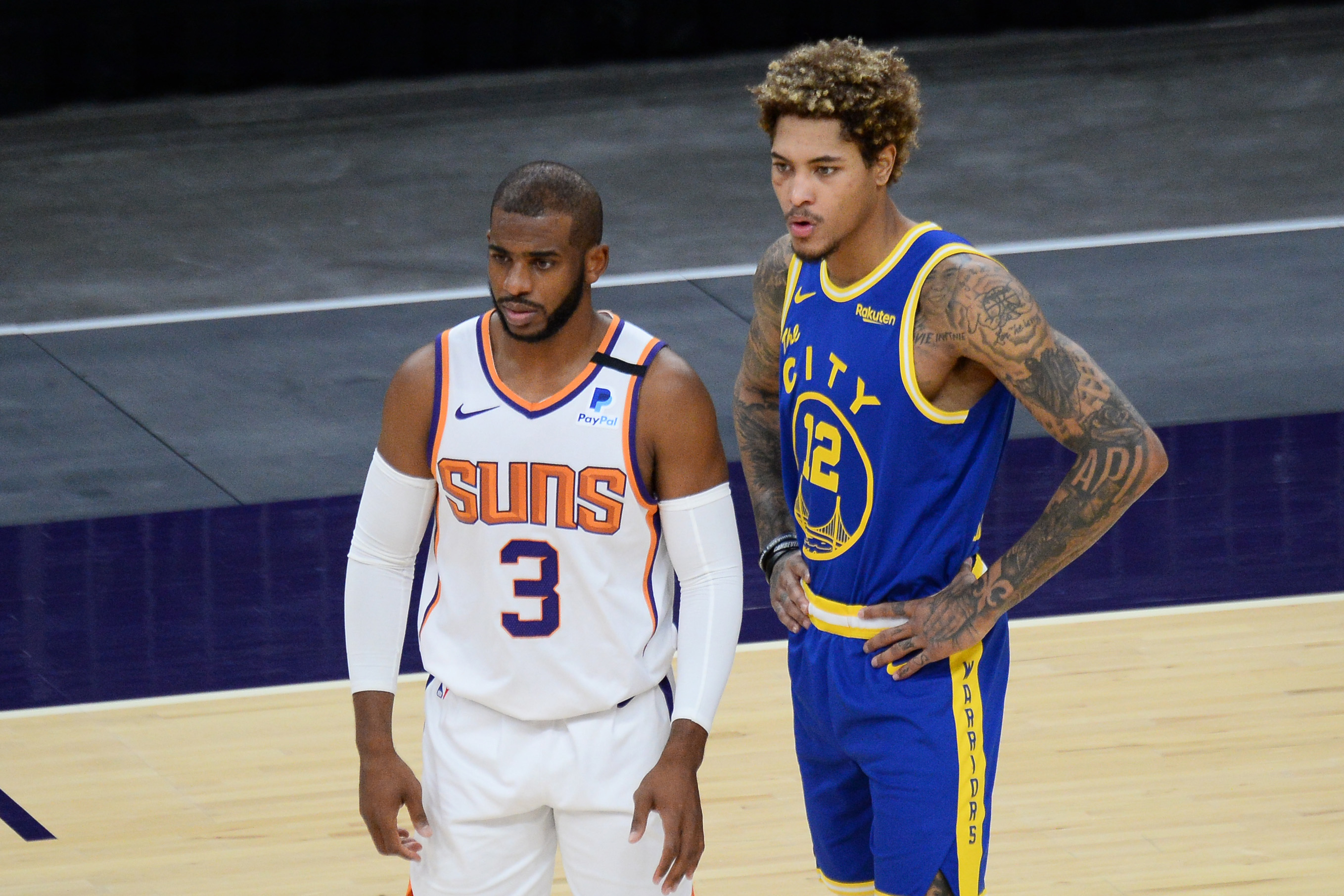 Oubre: Monty is one of the best voices I’ve ever had in my ear, keeping me on the straight and narrow. He helped me grow and realize what humility is. I’ll never take that for granted. Monty was one of the biggest inspirations in my career because of all the adversity he faced in his life, and he came out on top. For him to come into a new organization last year and already make us better within the year he was there, shows a lot about who he is, and obviously, this year for them to make that jump, it was already set in stone because of the foundation Monty came in and built. I give him the credit for getting those guys ready for this year to make that playoff push. They were ready for whatever. I’m super proud of them. I have no hate in my blood. I’m on my own path, doing my own thing. That’s their path. I can only show love instead of any hate because blessings will come back around.

The slowest players in the league, according to NBA 2K22

Marc Gasol has not yet made a decision about his future