Everton midfielder Fabian Delph has suggested the Covid-19 vaccine is not needed after the Premier League ruled all players need it to play this season.

The England international shared a post on Instagram that complaiend that “it is now ‘a conspiracy theory’ to believe that the immune system is capable of doing the job it was designed to do”.

His comments come despite a recent study from Yale Medicine that showed vaccines have been up to 95 per cent effective in preventing Covid-19 in those without prior infection, while also minimising serious infection in those who do experience cases.

What has been said?

The coronavirus has continued to cause havoc amongst top-flight English sides, with Arsenal cancelling their pre-season tour of the United States due to positive tests within their ranks, and Delph revealed his scepticism on social media.

“It’s now ‘a conspiracy theory’ to believe that the immune system is capable of doing the job it was designed to do,” read the story Delph shared to his 381,000 Instagram followers. 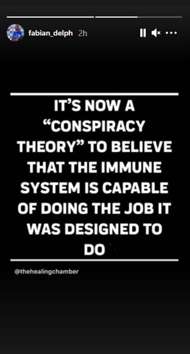 Players and other match-day personnel are expected to require proof of vaccination to take part in Premier League action in 2021-22.

Decision-makers are also considering a requirement for all fans at games to need both doses when the season is set to begin on August 14.

As of Wednesday, there has been a seven-day average of more than 32,000 cases in the UK per day, according to official data. Among people in the UK, 70 per cent have received at least one vaccine jab and 56 per cent are fully vaccinated.