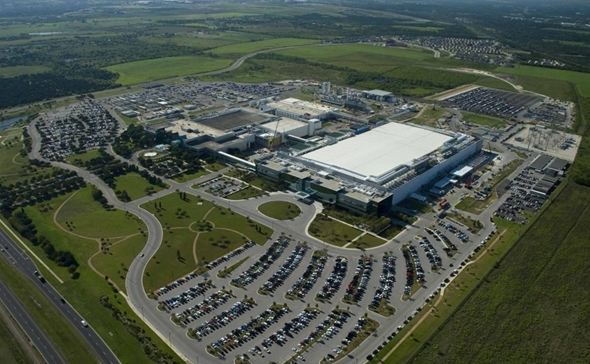 For Samsung Electronics, an obvious strategy in its ambitious high-stakes initiatives ― to transform the company status into a global top player in contract-based chip manufacturing ― will clearly be a transformational pursuit, as the top memory chipmaker is asked to move into the profitable foundry business.

Unlike the memory chip business where the core business nature lies in volume manufacturing, on-time delivery and better pricing, the foundry chip business is much more complicated as it is a contract-based process. Earlier, it made little sense for Samsung to use its manufacturing ability to make semiconductors for various third-party clients when it was more profitable to use that capacity for itself.

But as the global memory chip market is being controlled by three rational players including SK hynix and Micron Technology of the United States, Samsung’s future corporate sustainability is dependent upon its commitment to boosting its foundry business. The current market leader, Taiwan’s TSMC, also faced the same situation. Samsung aims to become the world’s foundry leader within the next few years.

If Samsung succeeds in becoming a major player in foundry services, its margin could improve substantially, given how profitable TSMC has become. Unlike many others, Samsung has the technology and it has a lot of cash for huge investments to overcome the manufacturing lead that the Taiwanese company has built.

“The memory chip market is becoming flattened and actually the market has been saturated with the top market players who are positioned to take profits consistently. Samsung’s push into foundry services makes sense given its strengths in manufacturing. But the issue is how the company can better handle client-related issues,” a senior industry executive said by telephone, Wednesday.

Because the foundry service manufactures chips for third-party clients, maintaining a high level of mutual trust is the core factor. A few years ago, Apple sued Samsung claiming that Samsung copied the look and feel of its iPhone design.

But behind the scenes, Apple’s main complaint was that Samsung had been using “classified information” its chip business division had learnt to enable possible early launches of Samsung Galaxy mobile phones. Samsung flatly denied such allegations. Apple and Samsung Electronics are still competitors in the mobile industry. However, Samsung supplies processor chips, application memory, flash storage and displays for many of Apple’s devices.

Samsung has a vertically integrated business structure, with its own capability to manufacture finished goods and also sell components to all global technology companies.

A few days ago, Samsung denied media reports that it was planning to establish an independent foundry business entity. As Intel and TSMC announced massive investment plans recently for their foundry businesses, the focus is now on what’s next for Samsung.

Samsung designs and manufactures its Exynos-branded chips, but as it also offers its foundry services to Qualcomm, Amazon and Apple, there are possible conflicts of interest.

“Well, I would say now is the time for Samsung to seriously consider its next steps for foundry services. TSMC has become the most trustworthy player in the foundry business because it set the corporate policy not to compete with clients. The key benefits of launching an independent unit are diversification, independence, finances and the removal of conflicts of interest,” another industry executive said.

Samsung has acknowledged the necessity to establish new systems to make its foundry business better in terms of customer base and market share. However, massive investments and its incorporated web-like semiconductor business system do matter, said officials.

And also taking an approach, keeping fairly old technology around to manufacture budget chips for customers who don’t require the very fine-tuned technology does make sense for Samsung in terms of building more trust from customers and clients. This approach would help it avoid any patent litigation.

As of last year, Samsung’s foundry business was said to have earned 14 trillion won. As previously announced, Samsung Electronics is on track to invest some 20 trillion won for the addition of its new foundry business in the United States. Plus, the unit price of EUV equipment, a vital component for advanced chip manufacturing, cost 200 billion won. Additionally, the company’s forthcoming P3 line will house both memory and foundry chip-manufacturing lines, just as its P2 line does.

“Today’s IDM frame isn’t too bad for Samsung as its moves to design needs-based semiconductors are underway. As these companies have lack of experience in designing, Samsung provides relevant services and won some constructive response,” the executive said. He said Samsung may tap into acquisition opportunities to strengthen its foundry services but claimed chances are slim for it to target NXP or GlobalFoundries right away for possible acquisitions.

Elon Musk`s joke on President Biden after the mission