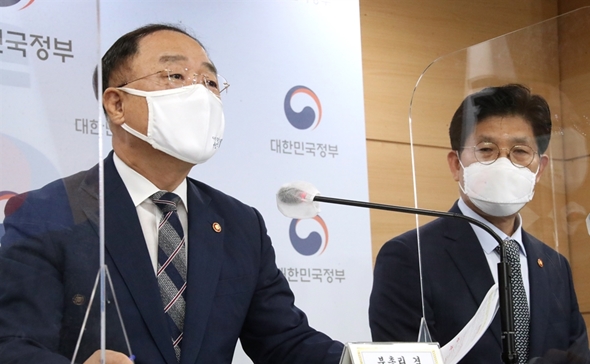 The government said Wednesday that steep increase in housing prices over the past few years will experience a deeper-than-expected drop, seeking to deter continued purchase of houses in Seoul and Gyeonggi area.

Yet little desired outcome is expected, since investors have learned that attempts to control what should be determined by supply-and-demand only fuels expectations of further price hikes.

Hong told a hastily-arranged press briefing that he expects housing prices to fall in the second half of the year, citing assessments by market experts, housing supply plans and tighter borrowing conditions brought on by a strengthened government clampdown of real estate speculation.

“The real estate market will experience a price fall sharper than previously thought, given a series of factors including the government’s plan to begin generating and recording demand for new housing in the latter half of this year,” he said during the briefing at the Seoul Government Complex.

Expectations of market participants measured by Consumer Sentiment Index (CSI) on housing price outlook show that a large number of investors believe the market boom will be sustained for some time, in what policymakers say is an unreasonable stance lacking critical factors including supply plans.

The prices cannot rise further, in his view, in a market where not only expectations but speculative demand and illegal activities are at play.

“Prospective buyers should consider changes in market conditions, financial regulations, objective indicators and the opinions of many experts instead of jumping on the bandwagon in a panic-driven frenzy.”

Yet few believe those comments will have a material impact on the market, as illustrated by indicators measuring the level and adequacy of housing prices nearing or having exceeded record highs.

Chief among them are the Korea-Housing Affordability Index (K-HAI), an indicator of loan repayments owed by median income households when they purchase mid-priced houses at a standard borrowing rate. Factored in are housing prices, income levels and borrowing rates. The higher the index, the greater the burden of repayment. A reading of 100 means that 25 percent of income is spent to repay principal and interest.

Data from a research institute under the Korea Housing Finance Corp. released in June showed the index for Seoul rose to 166.2 in the first quarter of this year, up 12.8 points from three months earlier and the highest since 2004 when the state-run organization began compiling related data.

The FSC chairman said household debt should grow no more than 4 percent in the latter half to meet the previous goal of capping the year-on-year increase at 6 percent.

“The debt grew about 5 to 6 percent in the first half, warranting the tightening of lending rules to bring the figure to between 3 and 4 percent in the second half,” he noted.