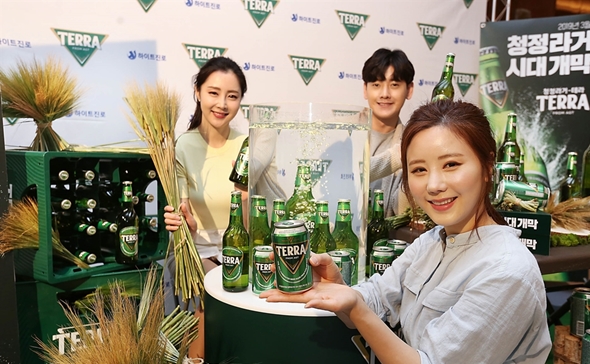 It has only been two years since the launch of Terra, but the brew has become one of the top-sellers here with its cumulative sales reaching 1.65 billion bottles as of March of this year.

Sales surpassed 1 million boxes just 39 days after its introduction, which is the fastest growth for a beer manufactured in Korea. Sales continued to rise to more than 1.3 million bottles sold by October 2020.

HiteJinro expects the popularity of its lager to continue this year. Unfazed by the resurgence of COVID-19 infections in the country, the brewer has targeted the niche market of people drinking at home.

HiteJinro decided to lower the price of canned Terra beer starting on July 14. Terra lager sold in 500-milliliter cans will be offered with a 15.9 percent discount.

FiLite is another popular alcoholic beverage manufactured by HiteJinro, the cumulative sales of which surpassed 1.2 billion cans as of June.

The low-malt beer comes in three different types: original FiLite, FiLite Fresh and FiLite Radler. The FiLite series was first introduced in April of 2017 and sales reached 1.21 billion cans just over four years later. The brewer says that nine cans of FiLite were sold every second during that time.

“We are planning to approach our customers with the friendly image that we seek for our Terra and FiLite beers. We will continue communicating with customers,” a HiteJinro official said.