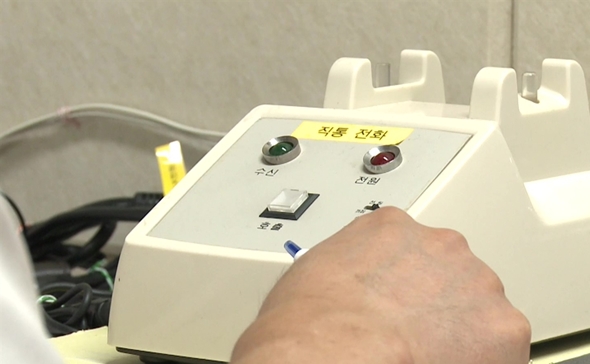 The restoration of communication hotlines between South and North Korea, Tuesday, has led Seoul and Washington to express optimism about a potential reconciliatory mood on the Korean Peninsula.

However, experts said, the government here should not get too excited over the resumption of inter-Korean calls, noting that the North may only be reaching out to address its economic difficulties, food supplies and COVID-19 vaccinations, rather than for candid talks on the denuclearization of the Korean Peninsula

“I think we have to view this as a positive sign for inter-Korean relations ― but not to get too excited about any sort of breakthrough just yet,” Harry Kazianis, senior director at the Center for the National Interest, told The Korea Times via email.

“It is possible this could be a play by North Korea to see what aid it can get from Seoul such as food aid, vaccines or personal protective equipment. However, as always, North Korea will want these things with little supervision of where they go and what they do with them.”

The restoration came 13 months after Pyongyang cut them off, June 9 last year, in retaliation over Seoul-based activist groups’ campaign of flying anti-Kim regime leaflets across the border. The regime also blew up a building housing the joint liaison office in Gaeseong in the North.

Upon announcing the news, presidential officials said the restoration would play “a positive role in improving inter-Korean relations, as well as progressing the U.S.-North Korea talks and negotiations on the Korean Peninsula’s denuclearization.”

The ruling bloc also hailed the restoration of communications. Democratic Party of Korea Chairman Song Young-gil wrote on Facebook that “it was a rain shower on a dessert,” while presidential contenders of the party also expressed their high hopes on proper talks between two Koreas.

The U.S. also welcomed the restoration.

“We certainly believe that this is a positive step,” said Jalina Porter, principal deputy spokeswoman of the U.S. Department of State. “I’ll also say that diplomacy and dialogue are essential to achieving complete denuclearization and establishing permanent peace on the Korean Peninsula.”

Despite the rosy outlook, doubts remain that this may become another empty gesture.

“At the moment, both North and South Korea are nearly completely focused on the COVID-19 pandemic, and for both sides, the impact that has on their domestic situations is paramount,” Kazianis said. “For example, I see little chance for a South-North summit anytime soon or any breakthrough on denuclearization this year as COVID-19 has to be the focus for both countries.”

Prof. Kim Dong-yup at the University of North Korean Studies also said South Korea should not overreact given the North Korean media’s reports regarding the communication lines restoration.

“While South Korea was promoting the restoration, with Cheong Wa Dae announcing the news by itself, the North ended it with a KCNA report. There were no reports even in the Rodong Sinmun,” Kim said.

Unlike Seoul, Pyongyang announced the restoration only through the KCNA and a radio broadcast that targets the outside world. The Rodong Sinmun newspaper broadcaster Korean Central Television, which target North Koreans, did not cover the news.

“It was just the restoration of communication lines, and that’s it. The restoration is just providing an environment for the North to focus on internal affairs such as its five-year economic plan.”

“It is worrisome that (the government) is overplaying the restoration of communication lines,” said Yoo Seung-min, a former lawmaker and presidential contender from the conservative main opposition People Power Party (PPP).

“If the Moon administration stages a promotional show as its term is nearing the end, no member of the public will fall for that trick. Since the administration will be replaced soon, it should focus on facilitating talks that the next government can succeed to.”

PPP Rep. Tae Yong-ho said, “We should not neglect the chances of the North attempting to exert influence on next year’s presidential election with various events after the restoration of cross-border communication lines.” Tae was North Korea’s deputy ambassador to the U.K. before defecting to South Korea in 2016.

Skill centre along Yamuna Expressway in next 6 months