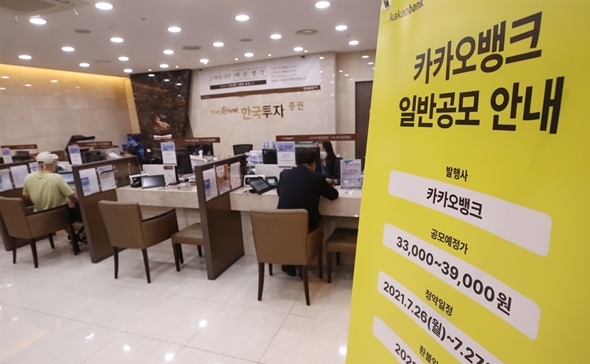 KakaoBank’s corporate valuation at the center of controversy

For the first-time ever, a local securities company issued a “sell” recommendation for shares being newly offered through an initial public offering. Despite generating a huge buzz among investors, KakaoBank set the humiliating record, becoming the country’s first IPO stock to receive the unprecedented “sell” opinion due to its offering price being overpriced, according to the securities firm.

BNK Securities published the research report with the recommendation Monday, the first day of a two-day subscription period for stock allotments to retail investors. Other brokerages, including Yuanta and Meritz, also pointed out that the corporate valuation was excessive ― eBest Investment & Securities stated that the valuation from the offering price reflected a significant premium, adding the excessive valuation was unlikely to last.

Analysts point out that in order for KakaoBank’s high valuation to last, the internet-only lender needs to continue to prove its differentiated business model, such as synergy created from its digital platform model or an expansion of its platform business.

Despite the controversy, the final result of the retail investors’ rush for shares in the bank was not that bad.

Institutional investors also flocked to their stock allotment at a competition rate of 1,732:1, the second-highest ever, following SKIET’s listing earlier this year. Over 1,280 local and 380 foreign institutional investors participated in the allotment process. Market watchers partially attributed the enthusiasm shown by both retail and institutional investors, in spite of the overpriced valuation, to favorable market conditions for IPOs. Among 55 companies that went public this year, only eight saw their shares fall below the offering price, meaning that investors see there’s a more than 85 percent chance of making short-term profits from IPOs.

The analysts warn that the current “listing fever” does not guarantee the long-term success of newly-offered stocks on the KOSPI. Share prices could quickly nosedive if investors see a massive amount of stocks being dumped, as they mostly join the subscription process for short-term profit taking.

Reflecting such concerns, the price of KakaoBank’s unlisted shares traded on the country’s over-the-counter market dropped to 57,000 won each Tuesday, plummeting more than 24 percent from the previous day. It is also the lowest price in the past 12 months and almost half its record high of 112,000 won last September.

Ugly Day Comes to a Close