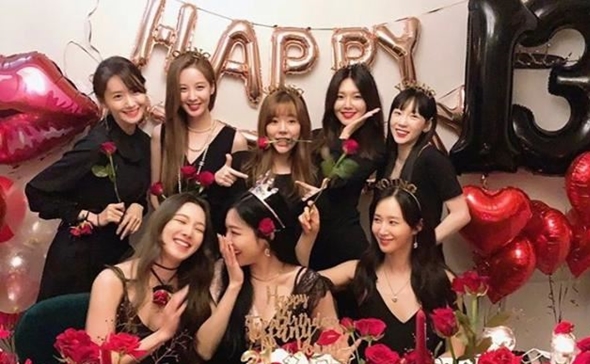 All eight members of K-pop girl group Girls’ Generation will reunite on tvN’s variety show, “You Quiz on the Block,” about four years after their last time performing together on a Korean music show.

A tvN official said that the cable network is currently in talks with the group to confirm a filming date.

“We have not yet decided on the air date,” he added.

According to media reports, the octet is appearing on the show to celebrate the 14th anniversary of its debut. Girls’ Generation debuted in 2007 with the album “Into the New World.”

It has been about four years since all members appeared on a TV show together, following their performance of “Holiday” on multiple music shows in 2017.

Since its debut, Girls’ Generation has rolled out a series of hits, including “Gee” (2009), “Genie” (2010), “Run Devil Run” (2010) and “Mr. Mr.” (2014). It was initially a nine-piece group, but member Jessica quit the act in 2014. Although some of its members ― including Seohyun and Sooyoung ― left SM Entertainment and joined other management companies, they are still part of Girls’ Generation.

In February, the team was rumored to have been gearing up for a new album, but SM said at that time that nothing had been decided.

Meanwhile, “You Quiz on the Block” has temporarily stopped shooting new episodes after a staff member tested positive for COVID-19 on July 23. The rest of the cast and crew, including the show’s hosts Yoo Jae-suk and Jo Se-ho, tested negative.