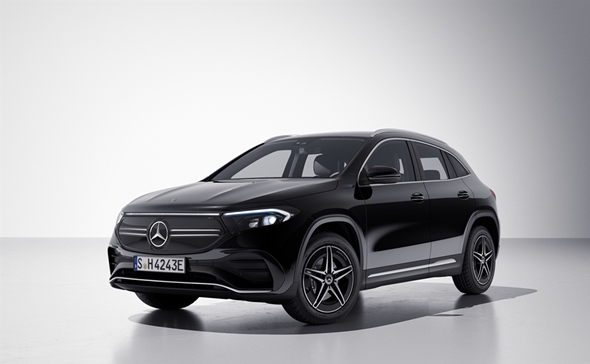 The new EQA has improved compared to the previous version in terms of its design, interior space and driving performance as well as safety features. In particular, the compact EV is optimized for urban lifestyle with efficient electric powertrain and best-in-class safety, Mercedes-Benz Korea said.

The new EQA’s design embodies the Mercedes-EQ brand’s “progressive luxury” identity, which shows the classic features of an electric vehicle as well as the German carmaker’s unique luxurious sensibility.

The black panel radiator grille, bearing Mercedes-Benz’s triangle star symbol, is a unique design element of the Mercedes-EQ. The fiber-optic strip that crosses the front panel connects with daytime running lights and increases visibility for the driver not only during the daytime but also at night.

The new EQA’s interior design creates a futuristic atmosphere with its color, shape and materials. It adopts a new style of backlight trim, a total of five circular vents with a turbine-type air guide plate, two 10.25-inch wide-screen displays and an MBUX (Mercedes-Benz User Experience) system.

Drivers can use the touchscreen, touchpad and steering wheel control panels to intuitively operate all vehicle functions including its navigation search and direction guidance via MBUX. They can also use voice recognition technology to control the functions, which will automatically improve and adjust to the user’s driving style.

MBUX is equipped with a navigation system specifically designed for Mercedes-Benz’s EVs, providing information about electricity charging stations along the travel path to the destination.

EQA drivers can keep a close watch on their vehicle’s charging options, power consumption level and energy flow easily with the EQ menu on the display screen. The German carmaker’s “Mercedes Me” mobile application allows charging settings and pre-temperature control while outside the vehicle too.

Regarding safety, Mercedes-Benz says its compact EV features unrivaled quality compared to those in the same segment by other carmakers.

It is the first compact electric SUV by the German carmaker to introduce the Driving Assistant Package system that automatically adjusts car speed by recognizing the signs on the road and keeping a safe distance behind vehicles ahead.