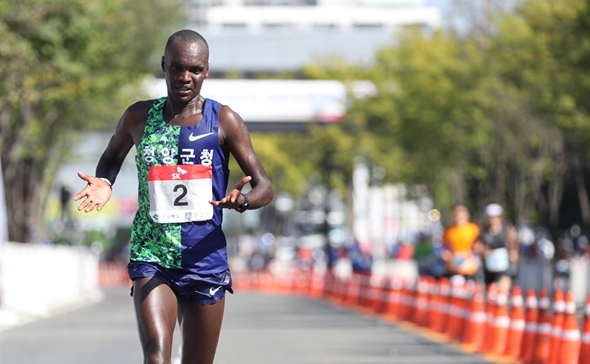 As the Tokyo Olympics’ motto “unity in diversity” says, there are five naturalized athletes across four sports who are competing for Korea in the 2020 Games.

Out of 233 athletes representing Team Korea, only two percent are naturalized. Of the five naturalized athletes, two are part of the women’s table tennis team and one each are competing in the men’s marathon event, men’s rugby sevens and women’s basketball tournament.

The “special naturalization” program was introduced in 2010, which allows qualified athletes to hold dual citizenship.

Hopes are high for Oh to win a medal at the running event, scheduled for Aug. 8, and provide a much-needed boost for Korea’s marathon, which has stagnated in recent years.

“My coach Oh Chang-seok, who unexpectedly passed away in May, always encouraged me to win an Olympic medal. I plan to do my best so I can dedicate my medal to him,” Oh said in previous interviews.

Kim started playing rugby while studying in Canada in 2006 at the age of 15. The athlete earned Korean citizenship in August 2017 and has played a key role in getting Team Korea to qualify for the Tokyo Olympics.

“Even if for just one day, I wanted to raise the Korean national flag up here at Tokyo Stadium. I am devastated that I never got to do it,” Kim told reporters after playing Japan in the 11th-12th placement match, Wednesday.

Jeon, who had represented her homeland at the youth level, moved to Korea in 2008 and gained Korean citizenship in 2011. At the 2016 Summer Olympics in Rio, Jeon was eliminated in round 16 in the women’s singles tournament and in the quarterfinals in the women’s team event.

At the 2020 Summer Olympics in Tokyo, she lost to Japan’s Mima Ito, who won the gold medal in the mixed doubles table tennis and was defeated 4-0 in the quarterfinals of the women’s singles tournament. However, she will participate in the women’s team event, scheduled for Aug. 1.

Basketball player Jin An (Xu Xiao Tung) is originally from Taiwan, but became a naturalized Korean citizen in 2013. She was part of the national team at the 2015 U19 World Championships.

Jin belatedly joined the national team after Kim Han-byul (Kimberley Roberson), a naturalized athlete from the U.S. withdrew due to a wrist injury. The Korean women’s basketball team lost 69-73 to Spain, 53-74 to Canada and is set to play against Serbia on Aug. 1.