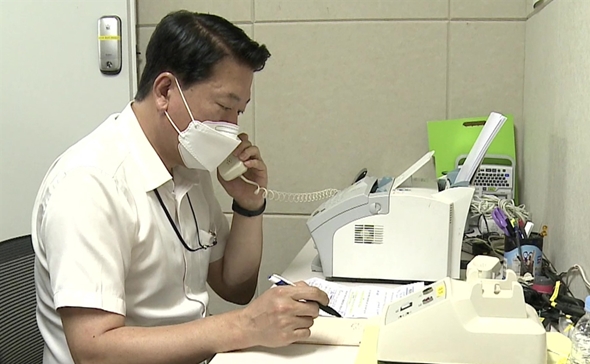 This latest development has raised hopes for another reconciliatory mood on the Korean Peninsula and a resumption of the stalled nuclear talks between the United States and North Korea.

“South and North Korea have agreed to restore their communication lines, which had been severed, as of 10 a.m., Tuesday,” presidential senior secretary for public communication Park Soo-hyun said during a press conference.

All direct communications between the two Koreas were cut unilaterally severed by the North on June 9, 2020.

A senior Cheong Wa Dae official said President Moon Jae-in and North Korean leader Kim Jong-un have exchanged letters multiple times since April, on the occasion of the third anniversary of the Panmunjeom Declaration made during their first summit held April 27, 2018.

The official said, however, that the leaders had not spoken with each other via telephone, or consulted about doing so or having an in-person meeting. Also, the official did not reveal which side first suggested restoring the communication lines, saying, “The communication lines were reactivated through consultations between the two sides.”

The Ministry of Unification said representatives from the two Koreas held a telephone call at 10 a.m. utilizing a fixed line crossing the Panmunjeom border area for technical testing, and then another one from 11:04 a.m. to 11:07 a.m. through a line between the joint inter-Korean liaison office in Gaeseong and its Seoul branch. During the conversation, the two sides agreed to call twice a day at 9 a.m. and 5 p.m., as they used to do before the North severed communications.

The Ministry of National Defense also said the Western Sea military communication line with the North was restored at 10 a.m. and was now fully operational. The ministry added that it was working on technical problems on the East Sea communication line, and the two sides will exchange calls at 9 a.m. and 4 p.m. every day.

The reopening of the communication lines comes 13 months after Pyongyang cut them on June 9 last year in retaliation for Seoul-based activist groups’ campaign of flying anti-Kim regime leaflets across the border.

The regime also blew up a building housing the joint liaison office in Gaeseong in the North. South Korean officials previously stationed at the office had been working in Seoul since January last year due to the pandemic.

A unification ministry official said the government could not confirm which location the North was answering the phone call from.

The hostile actions last year were largely interpreted as the North having grown frustrated at Seoul’s role in persuading the United States to ease sanctions on the regime, in the wake of the 2019 U.S.-North Korea summit in Vietnam that ended without a deal being reached.

Though the two side have restored the communication lines, Pyongyang did not apologize for blowing up the liaison office building ― the Cheong Wa Dae official said, “it is a matter of further consultations.”

“Now, the whole Korean nation desires to see the North-South relations recovered from setback and stagnation as early as possible,” it reported. “In this regard, the top leaders of the North and the South agreed to make a big stride in recovering the mutual trust and promoting reconciliation by restoring the severed inter-Korean communication liaison lines through the recent several exchanges of personal letters.”

It also reported that the reopening of communication lines will “play a positive role in improving and developing inter-Korean relations,” implying there could be more steps forward.

The restoration was announced on the day marking the 68th anniversary of the signing of the armistice that ended the 1950-53 Korean War, leaving the two Koreas still technically in a state of war.

Following the resumption of communications, expectation is growing that inter-Korean relations will pick up momentum, given previous cases of Seoul-Pyongyang contacts.

In February 2016, South Korea shut down the Gaeseong Industrial Complex, a joint business area operated by the two sides, and pulled out companies from the complex in response to the North’s nuclear tests and missile launches. The North countered this by cutting off the communications lines.

The lines were restored in January 2018, which became a prelude to the North’s participation in the PyeongChang Winter Olympics in February that year. Following the Olympics, Moon and Kim had three summits, in tandem with summits between then U.S. President Donald Trump and Kim.

Under U.S. President Joe Biden’s administration, South Korea has continued its efforts to revive a “peace mood” on the Korean Peninsula, sending messages to the North that it is time to resume talks, but the Kim regime had shown no response. Against this backdrop, the restoration of communications shows signs of progress, experts said.

“The exchange of letters shows that both South and North Korea are seeing the necessity for a breakthrough in the current circumstances,” said Hong Min, a senior researcher at the state-run Korea Institute for National Unification. “The restoration also implies that the North is willing to hold a certain level of talks with the South. The KCNA report contains an even more positive message than that of the South. Given this, we can expect certain levels of conversation, even a high-profile talk, in the second half of the year.”

However, Hong said there was always the chance that the North was using the communication lines as a tactic for talks with the U.S. through a two-track approach of appeasement with the South and closer ties with China.

Prof. Kim Dong-yup at the University of North Korean Studies was also cautious.

“Though this needs to be welcomed, the North may use the communication lines as a barometer to gauge how the Moon government will stage its North Korea policy,” Kim said. “Restoring the lines does not necessarily mean the issues of South Korea-U.S. combined military exercises, leaflet propaganda and sanctions on the regime have been resolved.”