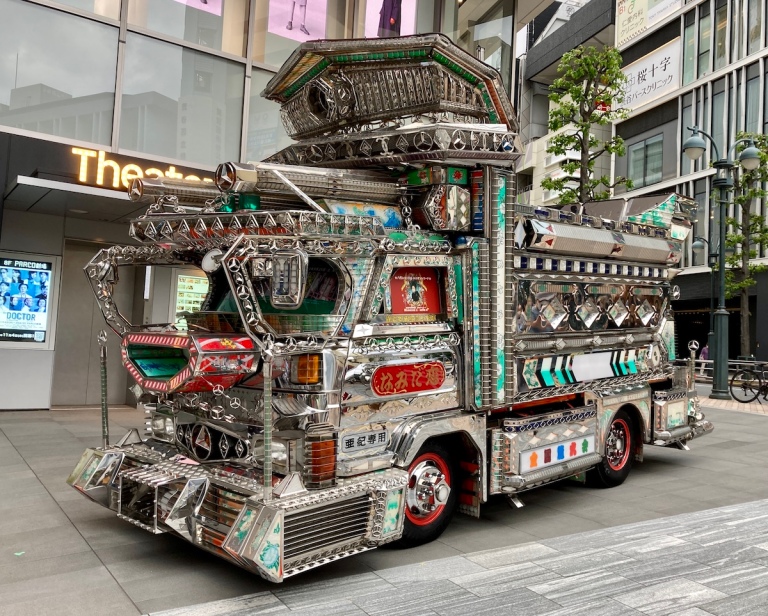 To celebrate Yashiro’s 50th anniversary as an entertainer, it was parked outside of Shibuya Parco for a limited time.

In the 1970s there was a smash hit film series about a pair of truckers who drove around Japan in their gaudily decorated trucks helping women (that they inevitably fall in love with) out of tough spots, called Truck Yaro (loosely translated as “Truck Rascals” or “Truck Guys”). This comedy-action series spanned 10 movies between 1970 and 1979 and were so popular that they incited a trend among Japanese truckers known as dekotora (“decorated trucks”), where they decorate their trucks with as many lights, colors, and embellishments as they can

While each film starred a different love interest, the fifth film in the series featured a beautiful, enka-singing lady trucker (who wasn’t a love interest, just a cool character) played by singer and actress Aki Yashiro. Because of that role, she quickly became known as the “goddess of truck drivers”. This year marks Aki Yashiro’s 50th year as an entertainer, and so, in her honor, a super famous dekotora known as the “Aki Kannon” went on display in Shibuya for a limited time. 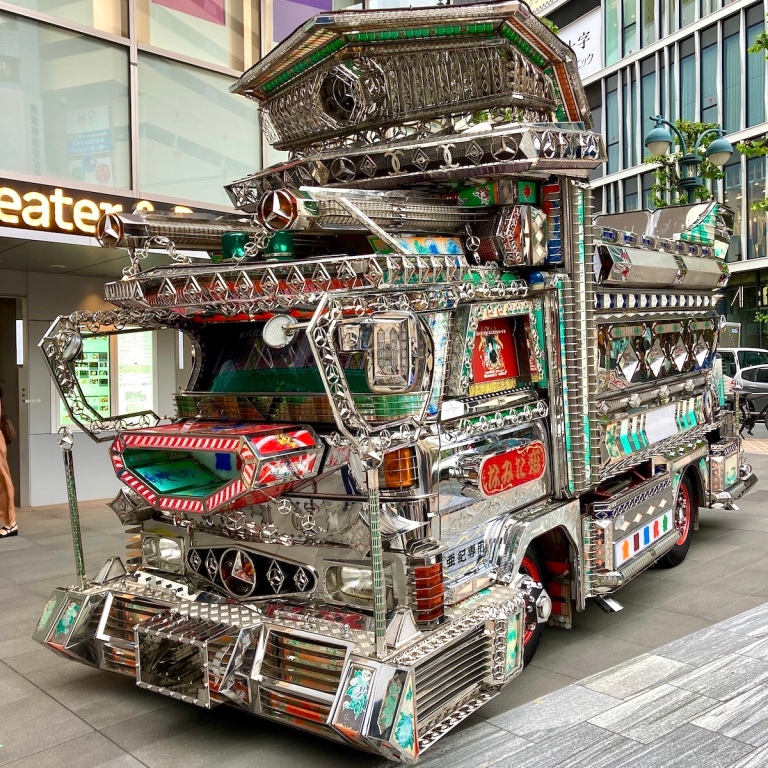 For the sake of those who couldn’t make it to the square in front of Shibuya PARCO before it was gone, we went to check it out…and man, was it cool! 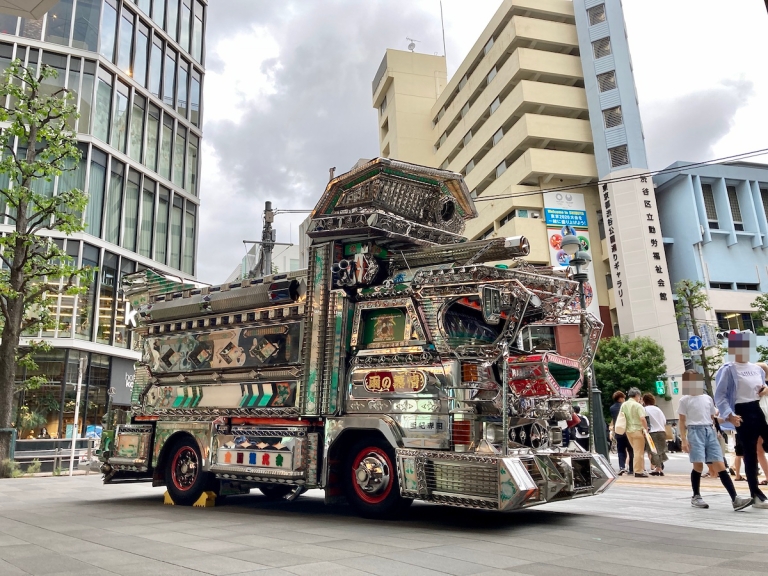 The Aki Kannon is famous for its crazy amount of bling. According to those in the know, the truck itself is a 1974 model of the Mitsubishi Fuso Third Generation Canter truck. Not only is it a classic vehicle, but its decorations make it super heavy, so it only appears at very select events. As a result, it’s often referred to as the “Mythical Dekotora” among fans. 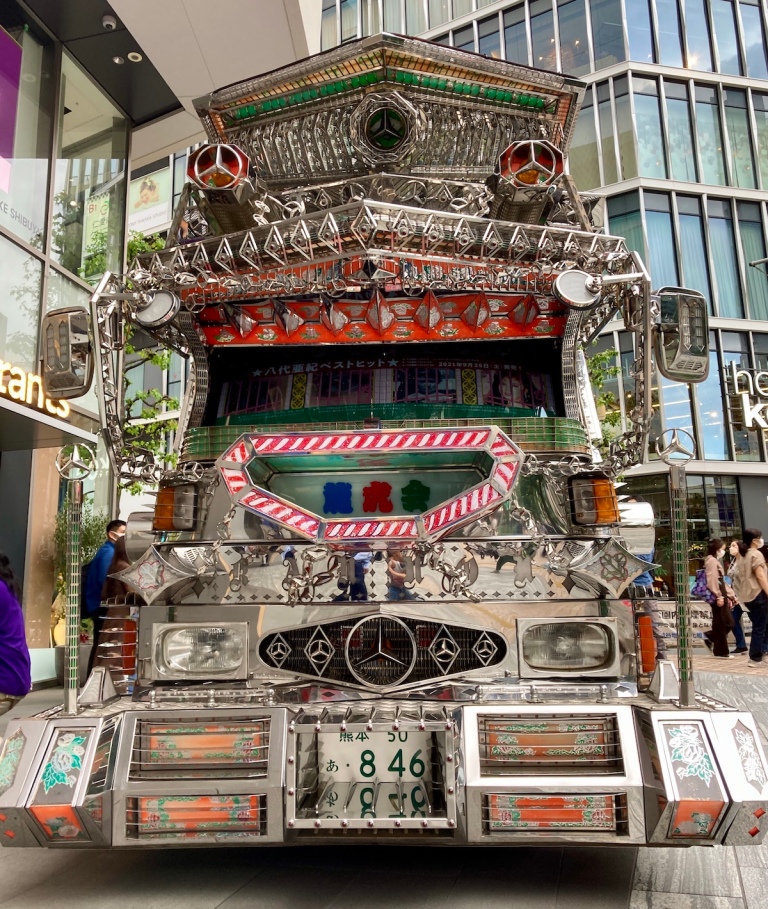 Like the Ichibanboshi dekotora from the Truck Yaro films that we got to see earlier this year, this legendary dekotora is completely decked out. It’s gorgeous, luxurious, and extremely elaborate, with shining silver trimming, bright, bold paint, and of course, plenty of lights. 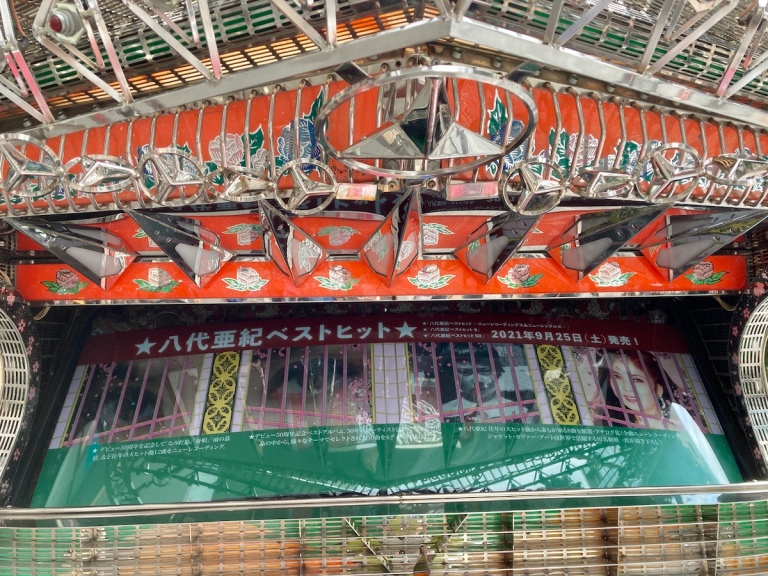 It has a serious Showa vibe! 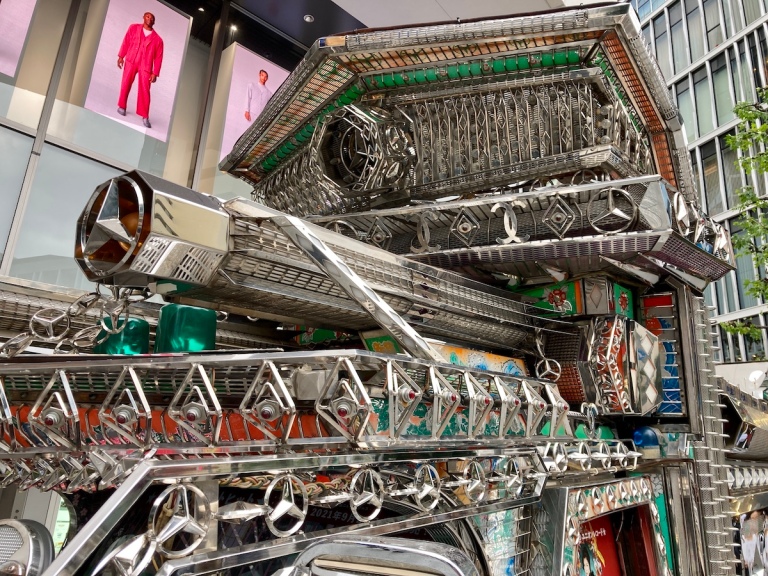 In honor of Yashiro, the license plates–though hard to see under the gloriously enormous bumpers–read “846”, which in Japanese can be read as “Yashiro”. It’s also a Kumamoto license plate, paying homage to Yashiro’s home prefecture. 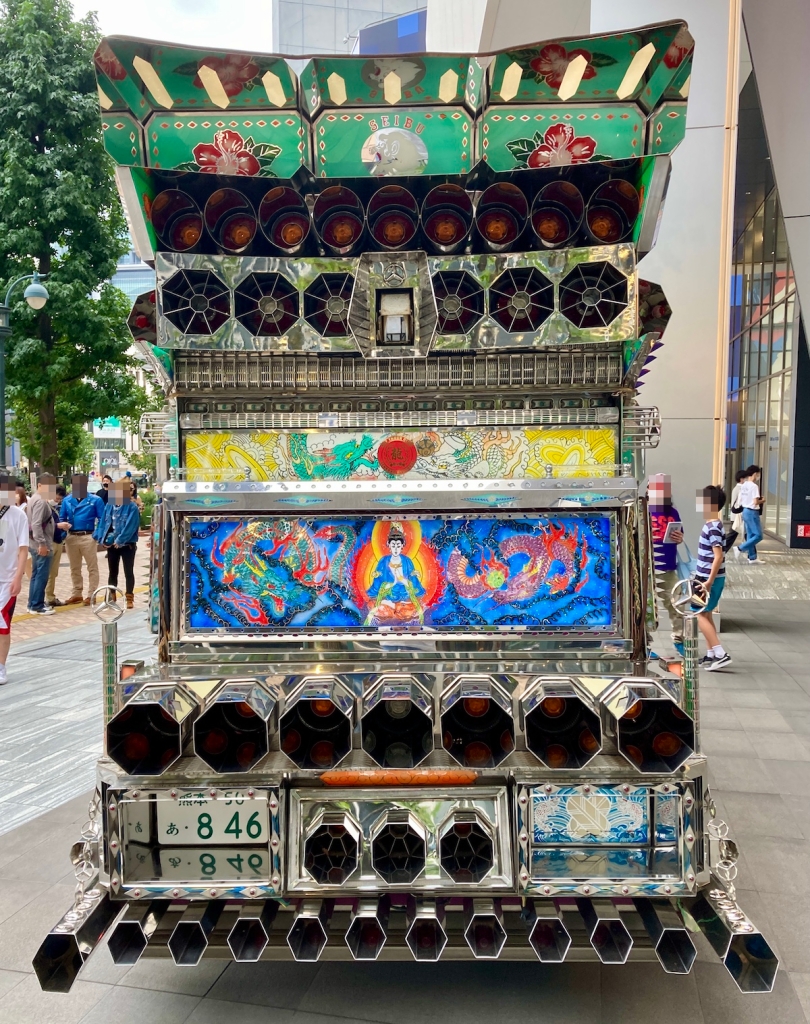 The names of Yashiro’s most famous songs, like “Funauta”, “Ame no Bojou”, and “Namida Koi”, are also carved into various places of the body of the truck. 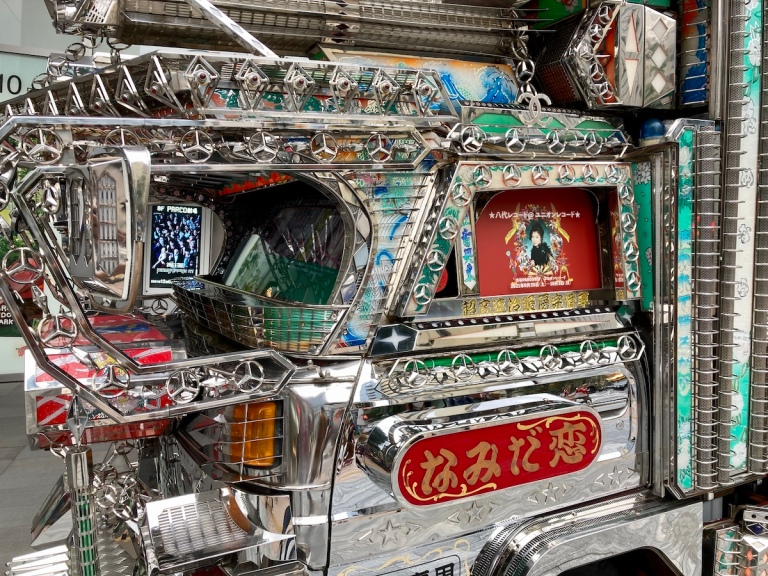 The mournful melodies of her music and her sorrowful, husky voice made her a huge hit among Showa-era truckers, especially during the first wave of popularity of dekotora, and that’s represented in the decorations used on this truck. 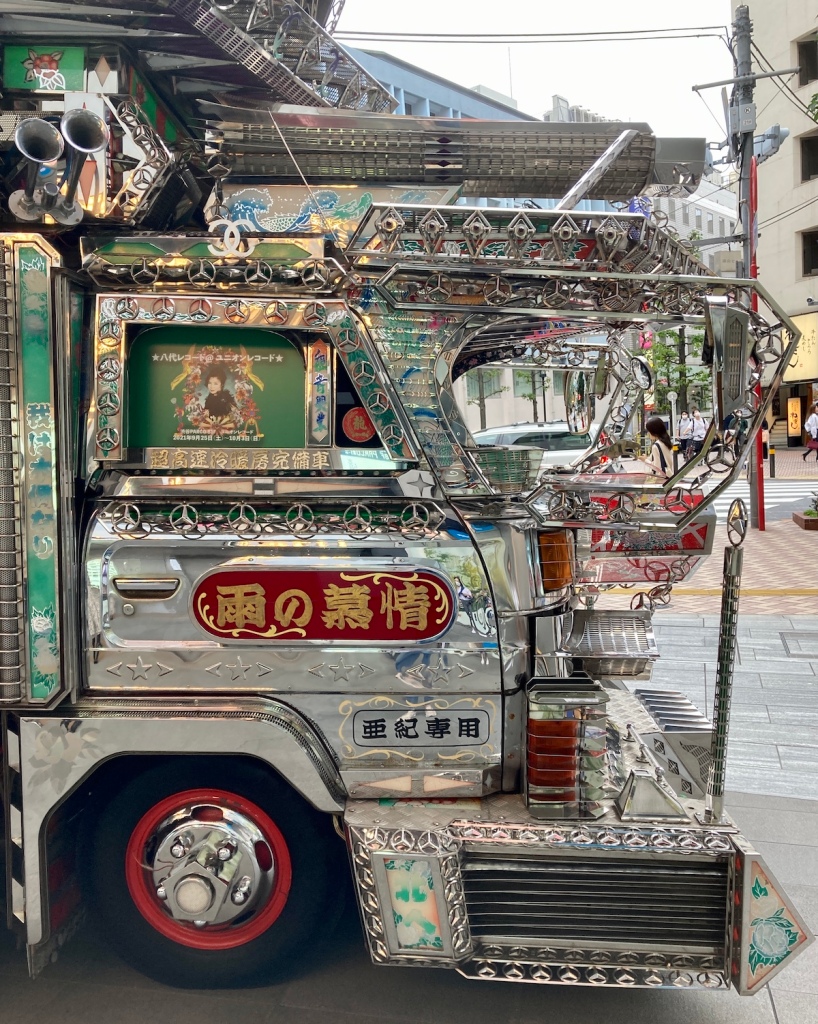 Unfortunately, the Aki Kannon has already been relocated, but Shibuya Parco–which is also home to the Nintendo Store–has launched a tribute to Aki Yashiro’s 50th anniversary through multiple special events throughout its shops. At the basement-level Union Records, for example, they’re selling limited-edition Yashiro Records until October 3. 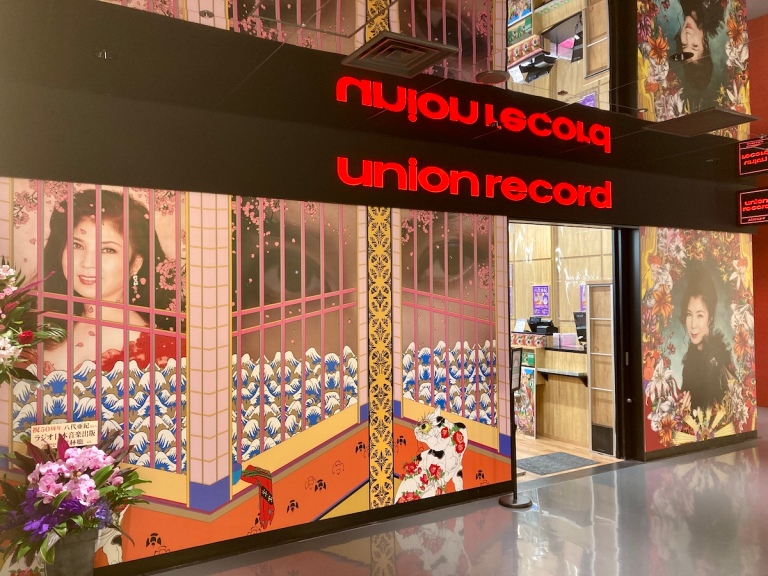 We took the opportunity to buy an analog version of her single “Funauta” for 500 yen (US$4.49), and we took a photo of it with the Aki Kannon, to mark this special occasion. Look at the photo on the cover! Isn’t she just an eternal madonna? 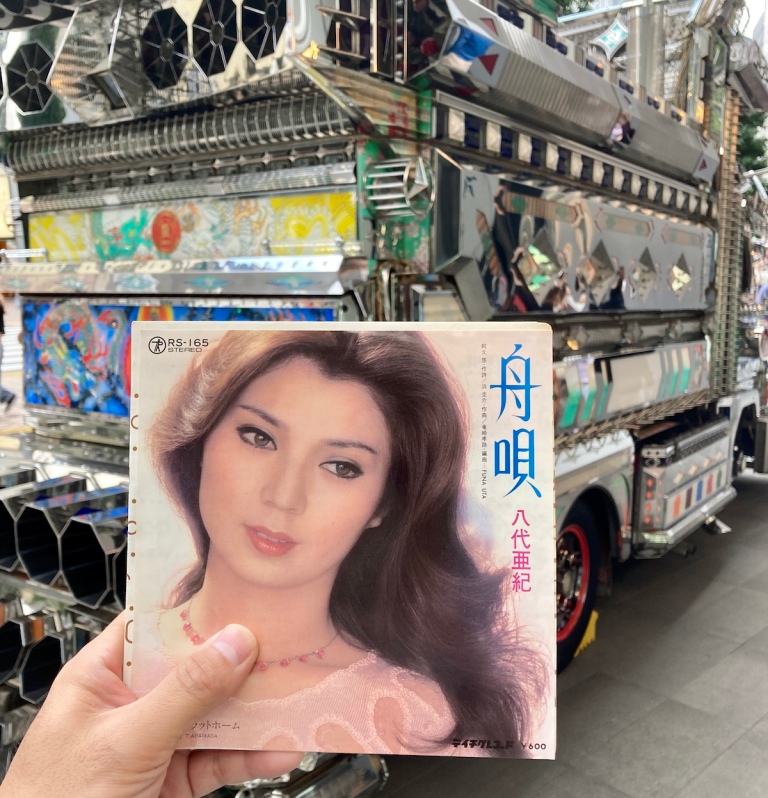 Though it was only around for a very short time, we’re glad we got to see the famous Aki Kannon dekotora. It exceeded our expectations! The world of dekotora, bursting with romance, is its own type of Japanese culture, and the Aki Kannon reminded us of that. We’re not sure when the mythical truck will make a reappearance again, but if you ever have the chance to see it, it’s totally worth checking out!