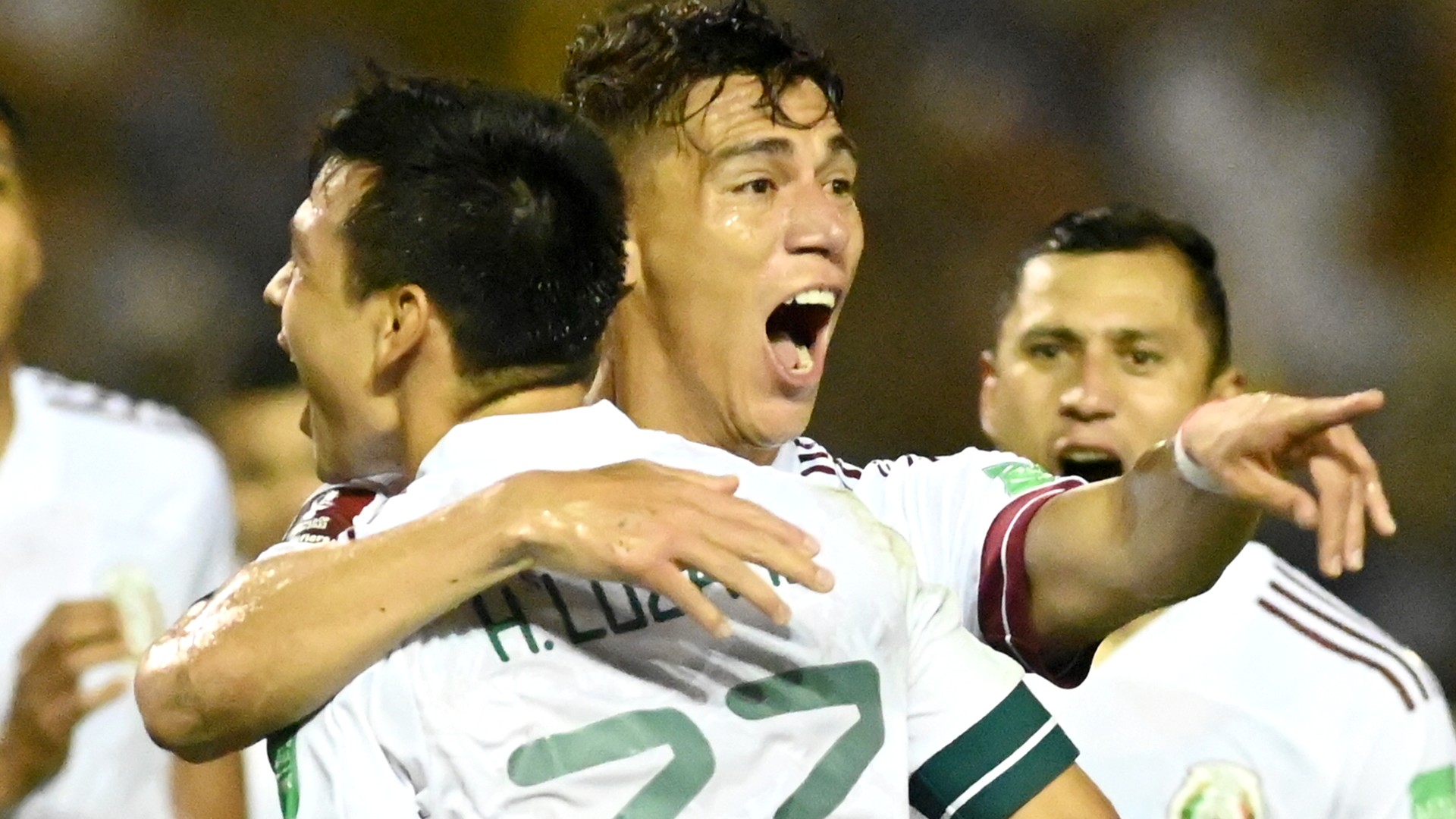 Mexico will head into its big showdown against the USA on Nov. 12 as the first-place team in the CONCACAF World Cup qualifying standings after a scrappy 2-0 road win in El Salvador.

The winning goal was scored on a first-half corner kick by Mexico center back Hector Moreno, who applied the header on a Jesus ‘Tecatito’ Corona delivery. The second goal came deep in second-half stoppage time on a Raul Jimenez penalty kick.

El Salvador rarely caused any issues for Mexico outside of the odd long-distance shot or cross into the box. El Tri’s back line calmly dealt with anything that the home team threw its way.

A comeback seemed unlikely for El Salvador when it went down to 10 men for denial of an obvious goal-scoring opportunity after emergency center back Mario Jacobo pulled down Rogelio Funes Mori headed on goal. The straight red card by referee Drew Fischer seemed harsh. But then the home crowd at the Estadio Cuscatlan got back into it when Mexican defender Nestor Araujo was shown a second yellow card and left the teams 10 on 10.

Mexico national team coach Gerardo ‘Tata’ Martino made eight changes to the starting lineup from the team that beat Honduras 3-0 on Sunday, and he also had a couple of injury substitutions to make for starting left winger Alexis Vega and left back Osvaldo Rodriguez.

93rd min.: Jimenez slots it home! Nice and calm as water bottles were flying from the stands.

91st min.: Penalty for Mexico! Raul Jimenez does it all by himself, rounding the El Salvador defense and running into the box where he’s brought down by Eduard Vigil. He’s going to take this one himself.

81st min.: Great play by Tecatito Corona in the El Salvador box. He connects with a teammate and gets this shot off. It came close:

80th min.: Another yellow card shown to Raul Jimenez. Mexico doing all it can to hold on.

75th min.: The crowd’s back into this and El Salvador draws a foul in Mexico’s half. Yellow for Hector Moreno … two minutes later it’s Hector Herrera seeing yellow.

70th min.: Last sub for Mexico in response to the red card: Chucky Lozano is off and Chaka Rodriguez comes on. And now the crowd is back in this

67th min.: What did Nestor Araujo do! Sent off! He’s on a yellow and raises his arm to stop an Alexander Larin attack. It’s an obvious second yellow and big mistake by the center back. He’ll miss the match against the USA next month. It’s 10 on 10!

62nd min.: SUBS – Fans are getting impatient. Mexico is killing a lot of time. Left back Osvaldo Rodriguez stays down for some time after a clash. Then come the subs: Jesus Gallardo for Osvaldo Rodriguez, Hector Herrera for Orbelin Pineda in midfield and Raul Jimenez for Rogelio Funes Mori at center forward.

56th min.: Nestor Araujo is carded for ramming into the back of Enrico Duenas.

55th min.: It’s easy now for Mexico. El Tri passes the ball all the way from Memo Ochoa into the El Salvador box, a loose ball falls to Orbelin Pineda, but he misses the target. The second Mexico goal feels like it’s only a matter of time.

51st min.: SUB – Down to 10 men, El Salvador brings on Lizandro Claros for midfielder Darwin Ceren. Claros should slot into the back line. El Salvador were missing several defenders as it was.

48th min.: Red card! El Salvador’s Mario Jacobo is sent off for bringing down Rogelio Funes Mori on his way into the box. The red seemed harsh. On the free kick, Jesus Corona comes close, but hits the outside netting.

46th min.: Second half is underway.

Halftime: Mexico gained a grip of this game from the very start and was patient throughout that first half. Outside of the odd cross into the box or a shot from outside the box, there wasn’t much created. So it was no surprise that the breakthrough goal came on a set piece by Hector Moreno. Mexico has been cruising since. El Salvador seems like it has an attacking flash or two in it, led by Enrico Duenas, but it’s not proving to be that dangerous.

40th min.: This match is stumbling to the first-half break. Not much happening in the penalty areas.

36th min.: That should’ve been a red card. Studs showing the whole way by Isaac Portillo and he takes out Luis Romo who stays down for a bit. Yellow card shown to Portillo for reckless play..

30th min.: GOAL MEXICO! On a corner kick from the left side, Hector Moreno applies the header, nodding it in side the far post. Good thing he stayed in the game.

27th min.: YELLOW CARD – Things are getting chippy and it’s Chucky Lozano who gets a yellow for going in hard and slightly raising his arm against Bryan Tamacas. Those two aren’t done tonight.

25th min.: Another injury for Mexico. Clash of legs leaves Hector Moreno limping. We’ll see if he can continue.

23rd min.: Chucky Lozano and El Salvador right back Bryan Tamacas come together on the left touch line and referee Drew Fischer has a warning for Chucky, who’s stunned. He thought he suffered the foul.

21st min.: SUB – Vega has to come off for Mexico and Tecatito Corona is his replacement and will play wide left in the attack.

18th min.: Chance for El Salvador. Enrico Duenas gets another cross off on the left, but the ball comes back to left back Alexander Larin who fires toward Mexico’s goal, but can’t get it on target (wide right).

16th min.: Alexis Vega goes up for a header and he has an issue with his right ankle. He walks off the field with the trainer and we’ll see if he can continue.

13th min.: Alexis Vega wins a corner kick and Mexico left back Osvaldo Rodriguez gets a header on it. Closer to the target than Chucky’s header earlier in the game.

11th min.: Araujo is back on right after El Salvador’s first real threat in the Mexico penalty area. Enrico Duenas lofts a ball across the face of goal but no one’s there. Mexico clears.

9th min.: Injury – Nestor Araujo hits the deck and the training staff is working on his left shoulder. Johan Vasquez is warming up in case.

5th min.: You thought that maybe Mexico would have to absorb some pressure early. But it’s the opposite. Mexico has taken a little of the air out of the building, knocking the ball around. Alexis Vega fired a shot right at the ‘keeper. Looking good for Mexico early.

3rd min.: Early half-chance for Mexico. Cross from the left and Chucky Lozano beats the left back to the ball but he can’t get the ball on target.

1st min.: We’re off. Mexico in white with the ball to start.

9:46 p.m.: Eight lineup changes are a lot from one game to the next. Memories of JCO. Didn’t work out for the USA in Panama, but this Mexican side should be talented enough to beat a shorthanded El Salvador.

El Salvador has several important players missing for this match, which will complicate things significantly. Center back Roberto Dominguez is suspended for yellow-card accumulation, and the Cuscatlecos were already without starting-caliber central defenders Eriq Zavaleta (concussion) and Ronald Gomez Rodriguez, who’s recovering from a fracture. The fill-in options are inexperienced.

As if that weren’t enough of a wrench in the team’s plans, it will also be without two starting midfielders: Narciso Orellana sits out after his red card against Costa Rica, and midfielder Jairo Henriquez will be unavailable after he pulled his right hamstring in the same game.

Plenty of changes by Mexico’s Tata Martino for the third and final match of the October window. He was already missing starting defenders Cesar Montes (yellow card accumulation) and Jorge Sanchez (muscle injury) and both have already returned to their club teams. Center forward Henry Martin is back from injury and is available off the bench.

How to watch El Salvador vs. Mexico

The El Salvador vs. Mexico match will be available in English and Spanish in the USA. CBS Sports Network (English) and Telemundo and Universo (Spanish) will carry the TV broadcasts. All three networks are streamed on fuboTV , which is available for a free 7-day trial to new subscribers .

Paramount+ subscribers will also get access to the match stream in English.

El Salvador’s home-field advantage should help keep the game close to start, but Mexico simply has too much quality and El Salvador is error-prone and missing key players in defense. With another trio of top attackers ready to come off the bench to keep up the pressure, Mexico should have the wherewithal to put together a multi-goal win.

The -1.25 Asian Handicap offers a bit of insurance should Mexico only manage a one-goal win. Since the -1.25 bet is split evenly over -1 and -1.5 spreads, half the bet would be refunded in that case.