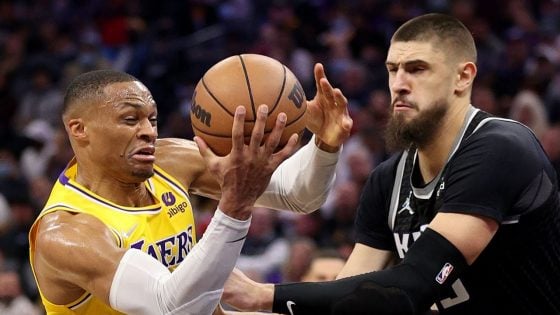 The Los Angeles Lakers recorded their biggest win of the season by crushing the Sacramento Kings 117-92 on the road. The win came just a couple of days after the Kings beat the Lakers in three overtimes at Staples Center.

LeBron James was out due to healthy and safety protocols but his absence was compensated by other players. Malik Monk came off the bench to score 22 points, Carmelo Anthony had 14 while Dwight Howard added 12.

Robert Horry, who won five of his seven NBA rings with the Lakers reacted to the win and the fact that his former team outscored the Kings in the second half 67-33.

“That’s crazy,” was Horry’s reaction to second half score on Spectrum SportsNet. “Now think about this – the Lakers outscored the Sacramento team more than they did in second half.

“And this is what we always talk about. How they need to come out aggressive and play good basketball and dominate. We always say ‘You got to beat the teams you’re supposed to beat.’ You just had a lopsided los to this team.

“Now you go up in their building and you destroy them. Your biggest win of all season. This is what we want to see. And this is without LeBron. Just imagine if LeBron gets in this system and y’all play with his intensity when he’s in the system.”

Groom started lifting the bride’s veil in the banquet hall itself, but what happened then would not be able to stop laughing. watch video