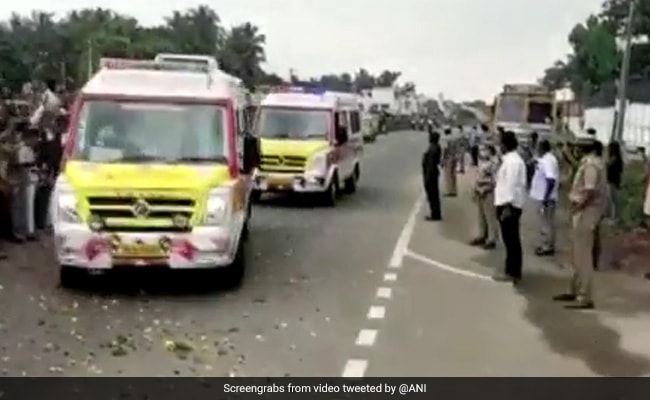 Locals showered flower petals on ambulances carrying the bodies of Chief of Defence Staff General Bipin Rawat, his wife and 11 other personnel who were killed in a horrific chopper crash on Wednesday.

Hundreds had lined up along the entrance of the Sulur airbase in Tamil Nadu, chanting “Bharat Mata ki Jai“. The bodies were brought here from the Madras Regimental Centre in the state’s Nilgiris district where Telangana Governor and Puducherry Lt Governor Tamilisai Soundararajan, Tamil Nadu Chief Minister MK Stalin and senior military officials paid their last respects to the killed personnel. Traffic on the route was diverted to prevent any disruptions.

All the personeel who were killed in the crash will be given full state honours, Defence Minister Rajnath Singh announced in Parliament today.

The chopper, carrying the Defence Chief, his wife and other personnel, crashed on its way to Wellington from the Sulur Air Force Base in Coimbatore. The sole survivor, Group Captain Varun Singh, is being treated for severe burns at the military hospital in Wellington.

The chopper, which took off at 11:48 am, was descending and would have landed in another 10 minutes. It was reported missing at around 12:08 pm. It crashed around 10 kilometres from the nearest main road, forcing emergency workers to trek to the crash site.

The black box or flight data recorder has been found.

IPS officers were surprised to see the dance, the girl performed like a grand master on the song of Bahubali

IPS officers were surprised to see the dance, the girl performed like a grand master on the song of Bahubali