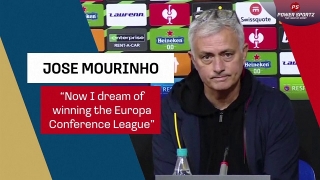 Roma head coach Jose Mourinho said on Wednesday that winning the UEFA Europa Conference League in its first edition would give Roma the chance to write a new page of its history, and reiterated that the Giallorossi want to go as far as they can in the new European tournament.

Playing their last group stage match at CSKA Sofia on Thursday, Roma’s only chance to top Group C is to win and hope that leader Bodø/Glimt will not get the three points against Zorya.

The group winners gain direct access to the last of 16 round, while the runners-up have to play a knockout play-off against the third-ranked teams from the Europa League groups.

Roma beat CSKA Sofia 5-1 at home in their opening group match in September.