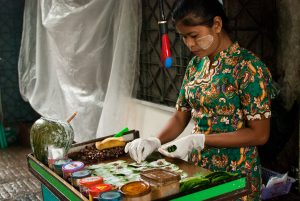 A woman prepares betel nut at a stall in Yangon, Myanmar.

Yesterday, The Irrawaddy magazine published a short article detailing a sudden boom in the smuggling of areca nut from Myanmar into India. According to the report, the illicit trade in the stimulant, which is often known as betel nut, is currently surging from Myanmar into Mizoram and Manipur states.

The article quoted Maria C. T. Zuali, the deputy commissioner of Champhai district in Mizoram, one of the three districts along the India-Myanmar border that are considered to be betel “smuggling hotspots,” as saying the central government had ordered local authorities to clamp down on the crossborder flows. “Some results have been achieved but the task is extremely challenging,” Zuali admitted.

Over the last few years, the press in Mizoram and Manipur has been filled with reports of authorities interdicting and burning large shipments of betel nut that have been illegally imported from Myanmar. Up to November last year, authorities in Mizoram alone confiscated nearly 1,109 metric tons of betel smuggled from Myanmar, which is worth some 358 million Indian rupees ($4.85 million), according to local media reports cited by The Irrawaddy. This represents a slight increase over the 1,080 metric tons interdicted during the whole of 2020.

Noting the impact on local betel nut farmers, the central executive committee of Young Mizo Association, the largest nongovernmental organization in Mizoram, announced late last month that it had formed a committee to assess the state’s illegal crossborder trade, and “also urged all its leaders and members not to indulge in the smuggling of areca nuts from southeast Asian countries.”

Use of areca nut – “betel nut” technically refers to the brain-revving combination of betel leaves and areca nut – is common throughout Asia. Today there are about 600 million betel users worldwide, and Myanmar accounts for more than half of Southeast Asia’s betel consumption. The World Health Organization ranks it as the fourth most commonly used psychoactive substance after alcohol, tobacco, and caffeinated drinks like coffee and tea.

According to The Irrawaddy’s report, India allowed the tariff-free import of betel nut from Myanmar beginning in 1994, when the two countries signed a preferential trade agreement. But India reimposed a 40 percent tariff on the product in 2018, after it grew concerned that importers were rerouting Indonesian areca nut through Myanmar to circumvent import tariffs. Invariably, the move prompted border traders to ship their product through “unofficial” routes.

The extent of the smuggling also speaks to the broader difficulties that Indian authorities face in controlling the winding 1,643 kilometer-long border that divides it from Myanmar’s Chin State, Sagaing Region, and Kachin State. A recent article from East Mojo, a news site that covers India’s eastern states, quoted one local official as saying that there are 40 crossborder smuggling routes in Champhai district alone.

The Irrawaddy’s report points out that the security of the Myanmar border is the responsibility of the Assam Rifles, a paramilitary force of the Indian Army, but that this “does not have the resources to plug all the illicit entry points where betel nut and other contraband items such as narcotics and gold are smuggled into India.” As a result, the state police have now been drafted in to help stem the flow of contraband.

Smuggling has long been a problem along the porous Myanmar-India border, which has also benefited the various local ethnic insurgent groups fighting for independence or autonomy from New Delhi, whose fighters are able to shift back and forth across the border. While there is no indication that the smuggling of areca nut has grown considerably worse since Myanmar’s coup in February of last year – unlike, for instance, the production and smuggling of methamphetamines – border security and crossborder insurgencies have prompted New Delhi to adopt a relatively lenient view toward the Myanmar coup regime.

As I noted last month, the Indian military views the Myanmar armed forces as a key partner in containing the insurgent groups of eastern India. The same would logically be true of any attempt to cut off crossborder smuggling.

Assuming that the Indian government lacks the wherewithal to adopt China’s recent solution to its leaky borders with Myanmar – the erection of a razor wire-topped steel fence along long stretches of the frontier – closer cooperation with the Myanmar junta is probably inevitable.