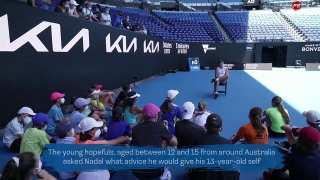 20-time Grand Slam champion Rafa Nadal practiced at Melbourne Park on Wednesday and conducted a question and answer session with a group of junior tennis players.

The young hopefuls, aged between 12 and 15 from around Australia, asked about Nadal’s life and career and the 35 year-old Spaniard said that if he had one piece of advice to give to anyone looking to carve out a career in the sport it would be… “listen”.

“I never considered myself smart enough to just do what I really think I have to do,: Nadal said. “So it’s about talking with the people that really love you or really want the best for you and try to follow their instructions.”

“I am not saying that I did everything the right way, but I tried very hard during all my tennis career,” Nadal added. “Since the age of 13 I have been practising a lot and with very high intensity, sometimes even too much. But I think I have zero to complain about, my attitude during all those years. Probably that’s why I had the very successful career.”