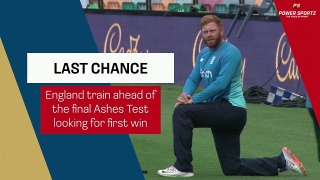 England trained at the Bellerive Oval in Hobart on Tuesday, on the eve of the fifth and final Ashes Test against Australia.

The tourists have had a torrid time ‘downunder’ so far – Joe Root’s team were battered in the first three Tests, but managed to battle to a draw in the fourth in Sydney last week.

Their efforts have taken their toll though – Jos Buttler’s tour is over after he broke a finger and Sam Billings has been called up to make his Test debut.

And both Ben Stokes and Jonny Bairstow are carrying injuries, but the pair are still expected to play.

Fast bowler Mark Wood said earlier in the day that the squad as a whole are in good spirits and looking forward to building on the result gained at the SCG.

Cricket News : Cummins – ‘so many positives’ Root ‘I want to take this team forward’ after Australia win 4-0