Black Adam star Dwayne “The Rock” Johnson shared a hilarious video where daughter Jasmine Lia pranked him by smothering his face in peanut butter. On Sunday, taking to Instagram, Johnson shared a clip where he seems keeping his eyes closed while his daughter stands in front of him holding a piece of tinfoil with a glob of peanut butter in the center. 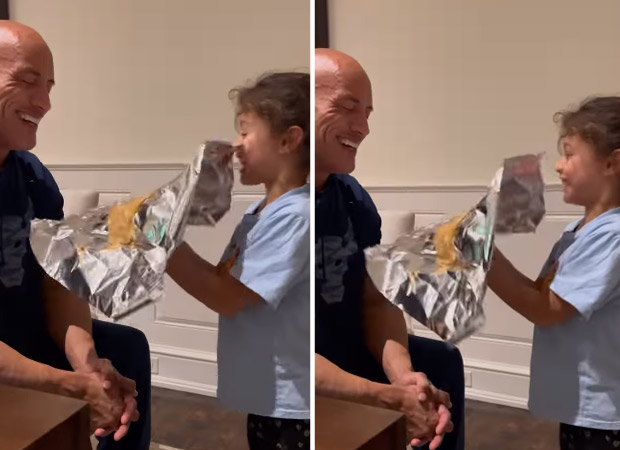 “I trust you. Jazzy, I hear a lot of foil,” Johnson says before his daughter slaps the tinfoil on his face and begins to laugh. “Oh my God,” Johnson says while peeling the foil off of his peanut butter-covered face.

“You’d think after all this time, I’d learn my lesson of playing my little tornado’s favorite game, ‘Daddy Close Your Eyes’ What a fool I am,” the actor writes alongside the video.

He further wrote, “(one day they’ll be grown & gone, and smashing the s— outta daddy’s face with peanut butter is the last thing they’ll want to do – so while they still love hanging out with daddy ~ bring on the peanut butter!!) #weekendfun #johnsongirls #facesmash.”

Johnson shares Jasmine and daughter Tiana with wife Lauren Hashian. He is also dad to daughter Simone whom he shares with ex-wife Dany Garcia.

For his upcoming projects, Dwayne Johnson is set to star in Red One with Chris Evans. He will also be featuring in DC film Black Adam in titular role. The film is scheduled to be released on July 29, 2022.