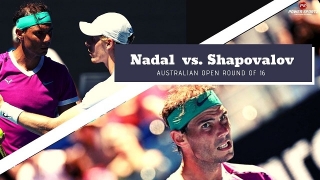 “It’s unfair how much Rafa is getting away with” – Shapovalov

Denis Shapovalov admitted that he had “misspoken” when he said that all umpires are corrupt after umpire Carlos Bernard refused to give Rafael Nadal a time violation for delaying Shapovalov on his serve in his five-set defeat against the Spaniard on Tuesday.

The Canadian pulled off one of the biggest victories of his career over third seed Alexander Zverev in the fourth round to reach his third slam quarter-final against Rafael Nadal and first in Melbourne.

The 22-year-old was unable to find his best form in the opening set, though, and then showed his frustration by getting into a row with umpire Carlos Bernardes over the time Nadal was taking between points.

Reaction from Rafael Nadal after the sixth seed from Spain beat Denis Shapovalov of Canada in five sets 6-3, 6-4, 4-6, 3-6, 6-3, to reach the semi-finals of the Australian Open in Melbourne.