Hyderabad: An unprecedented and sustained crackdown has been taken up by the State government against constructions that have cropped up without necessary approvals and violating the regulations. The action was initiated against 100 such buildings in the Hyderabad Metropolitan Development Authority (HMDA) limits in the last ten days.

Special teams were constituted by the administration to take up field visits, verify details and identify the unauthorised constructions. This exercise was followed up by appropriate action through demolition drives. Of the 100 such constructions, 77 were demolished while 23 others were sealed by the officials. 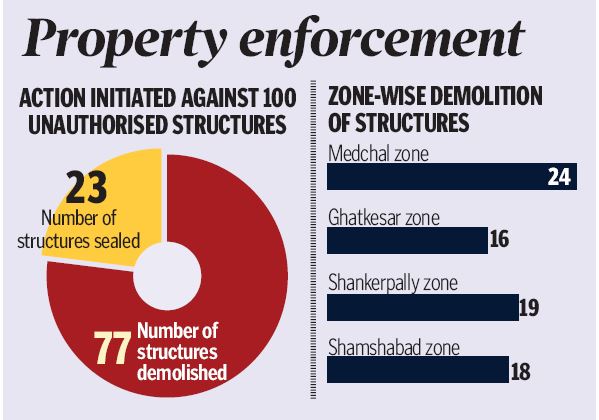 Apart from the HMDA, the special demolition drive has involved Urban Local Bodies (ULBs) of Commissioner and Director of Municipal Administration (CDMA) and District Task Forces (DTFs). The DTFs were constituted as part of Telangana State Building Permission Approval and Self-Certification (TS-bPASS).

Before the drive commenced, Metropolitan Commissioner, Arvind Kumar, had constituted four teams to do a ground survey and identify illegal constructions. Based on the reports submitted by these teams, necessary and appropriate action was being initiated.

The officials of HMDA, CDMA and other departments were instructed by the Metropolitan Commissioner to act against ongoing unauthorised constructions spread on a land parcel measuring more than 500 square yards as per the provision in Telangana Municipalities Act, 2019.

The special drive was planned and executed after several unauthorised constructions in HMDA limits came to the notice of Municipal Administration and Urban Development (MA&UD) Department. In some instances, those, who are building multi-storied structures based on the permission obtained through the Gram Panchayats, also came to the notice of the department.

DTFs function under the chairmanship of the District Collector and they monitor, identify and initiate action against unauthorised layouts, buildings deviating from the approved plans and constructed without obtaining permission.

Revocation of building permission, levying a penalty (25 per cent of land value), three years imprisonment and demolition without notice are the actions/steps that could be initiated based on the deviation.

Now you can get handpicked stories from Telangana Today on Telegram everyday. Click the link to subscribe.