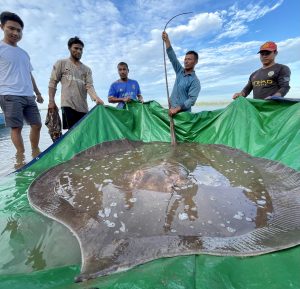 A female Giant freshwater whipray (Urogymnus polylepis) weighing 400 pounds and measuring 13 feet in length was caught and released in the Mekong River, Cambodia on May 5, 2022.

Credit: Wonders of the Mekong

Last week, fishermen in northern Cambodia captured a rare giant freshwater stingray in the Mekong River, a reminder of the unique aquatic ecology that is threatened by a rash of ill-considered hydropower dam developments on the river.

The 180-kilogram, 4-meter-long stingray was accidentally hooked by fishermen from a small island community in the middle of the Mekong River on May 5, according to a press release from Wonders of the Mekong, a USAID-funded Mekong exploration project. After the capture, the fishermen contacted the project to document the catch and facilitate its release back into the wild, the statement said.

This enormous species of stingray, which is also known by the Latin name Urogymnus polylepis, surfaces from time to time along the Mekong, but according to Wonders of the Mekong, are rarely seen due to their preference for the murky, densely silted waters far from the river’s surface.

Zeb Hogan, a fish biologist at the University of Nevada and the head of the Wonders of the Mekong project, said in the statement that the stingray was a sign of the unusually fecund and ecologically important stretch of the Mekong around Stung Treng, which is “emerging as a last refuge of many species of iconic aquatic megafauna,” including the Irrawaddy dolphin, softshell turtle, and giant barb.

“The fishers here tell stories of catching record-breaking stingrays and other giant fish,” Hogan was quoted as saying. “It’s a true wonder that a place like this still exists.”

One of the characteristics of this stretch of the Mekong are its deep pools, some of which are up to 80 meters deep, which formed the focus of a recently completed expedition by the Wonders of the Mekong. The expedition, which is a collaborative effort between the Cambodian Fisheries Administration, the University of Nevada, Reno, and  other partners, yielded a range of discoveries, the statement said, including the first-ever video of schools of migratory fish moving through one of these pools, 75 meters below the river’s surface.

The expedition’s findings pointed to the ecological bounty that is threatened by unmitigated river alterations, particularly large-scale dam projects, which have proliferated over the past three decades as the conflicts of the Cold War gave way to an era of breakneck economic integration.

While Cambodia has imposed a moratorium on new Mekong dam developments, China has constructed a cascade of 11 large dams on the upper reaches of the river in Yunnan province, and the government of Laos continues to press forward with nine planned dams on the mainstream of the Mekong, seven of which are now in various stages of development.

These projects, especially those in China, are believed to account for the punishing extent of the droughts that have hit the lower half of the Mekong in recent years, sending water levels to all-time lows. During this time, environmentalists and riverside communities and have also observed an increasingly erratic pattern of rises and falls in water levels, some of which are due to releases from dam reservoirs upstream in China.

Aside from these unique species, the lower Mekong is also crucial to the health and survival of the 60-odd million people that live within its basin. The river provides around three-quarters  of the protein consumed in Cambodia, for instance, and provides livelihoods for untold numbers of people from southern China to its delta in southern Vietnam.

Last week’s capture of a rare giant freshwater stingray helps clarify exactly what is at stake. The accelerating pace of development and dam-building, combined with the encroaching impacts of global climate change, could threaten the “lifeblood” of mainland Southeast Asia. Without concerted evasive action, said Sudeep Chandra, a University of Nevada researcher who took part in the Wonders of the Mekong expedition, the river could “gradually become so fragmented it will lose function, and thus no longer support the huge diversity of wildlife and millions of people that depend on it.”