The rap-rave duo Die Antwoord has been visited by social workers to establish the safety of their 17-year-old biological child in Cape Town.

The Western Cape social development department obtained a court order from the Cape Town Children’s Court on Tuesday, giving them access to inspect the safety of the child after allegations of child abuse and neglect against Waddy Jones (Ninja) and Anri du Toit (Yolandi Visser) were published by News24.

The duo has one biological child, who lives with them in Cape Town, and three foster or adopted children, who are back with their families or caretakers in Johannesburg. 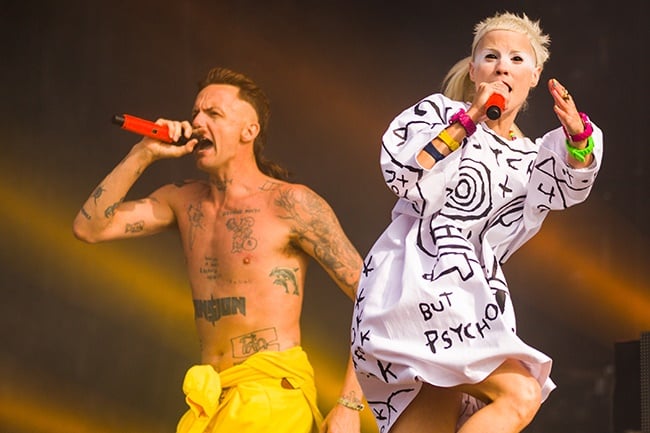 Waddy Jones (Ninja) and Anri du Toit (Yolandi Visser) of Die Antwoord on stage at the Southside Festival in Neuhausen, Germany in 2015.

According to News24’s sources, the couple has been living at the upmarket Dorp Hotel in Schotsche Kloof, Cape Town, since their 20-year old foster son, Gabriel “Tokkie” du Preez, in April accused them of treating him like their child slave.

Du Preez accused Jones and Du Toit of exposing him to pornography and nudity as a minor, abusing his child labour for their music videos and of encouraging him to participate in violent activities.

Du Preez, his minor sister and another minor boy from Johannesburg have all been living with Die Antwoord in Cape Town for various stints, but are currently back in Johannesburg. Various sources have told News24 they were treated differently to the couple’s biological daughter in terms of quality of education and general upbringing.

The police are investigating a criminal case – and Captain Veronica Banks, of the Gauteng serial and electronic crimes investigation unit, has been appointed to lead the probe. A meeting room at the Dorp Hotel was decorated in Die Antwoord’s “zef” style.

News24 understands that the Dorp Hotel, where a meeting room has been painted in Die Antwoord’s artistic style, initially refused social workers entry to the child, but that a subsequent meeting took place with Jones, Du Toit and their child at a private house on Tuesday evening.

READ | Die Antwoord’s ‘secret artist’ speaks out about abuse: ‘I sold out’

“The department can confirm that a home visit has taken place. Any further details in this regard can’t be divulged. At this stage, no further steps are being pursued against the owners of the premises [the Dorp Hotel],” said Esther Lewis, spokesperson for the Western Cape social development department.

In general, once the child protection investigation is concluded, the findings are presented to the Children’s Court, and the presiding officer will make a decision on which steps are to be followed next.

News24 understands the social workers were satisfied that their biological daughter was not in danger and could remain in their care.

Attorney Diaan Ellis, who was appointed by Jones and Du Toit to represent them in the matter, said the social development department’s investigation concluded that allegations published by News24 were “invalid”.

Asked which specific allegations he referred to, Ellis pointed to an interview with a young couple, who accused Die Antwoord of neglecting their child by leaving her as a 15-year-old child in their custody for days.

In 2019, Australian musician Zheani Sparkes filed a police report in Queensland, alleging Jones had sexually assaulted her during a visit to South Africa in 2013. And, in 2014, Italian-American singer Jade Carroll accused Jones of sexually assaulting her in Italy. He denied both claims.

We want to hear your views on the news. Subscribe to News24 to be part of the conversation in the comments section of this article.