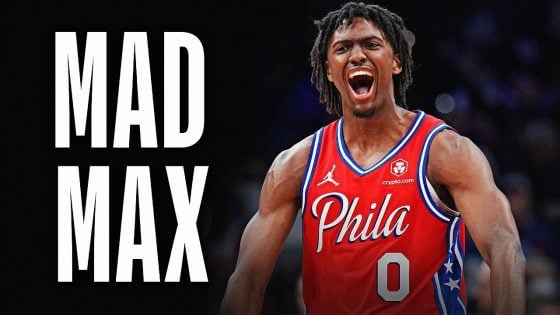 The 21-year old point guard Tyrese Maxey is becoming one of the most talented players of the Philadelphia 76ers. His awesome skills can’t be unnoticed and his contribution to numerous victories of the team is vivid.

His teammate Georges Niang thinks that Maxey is a perennial All-Star in the making. “He’s just a joy to be around,” he said about the point guard on SiriusXM Radio. “Not only is he a tremendous player, but he’s an even better person. His energy is contagious. We joke about around the facility we have if Tyrese has ever had a bad day because his hair is always flopping around, smiling, laughing, yelling.

“His development this year is something I’ve never seen in all my years of basketball. It’s not like I’ve been in the NBA a long time, but the fact that he came in and playing spot minutes the year before and then gets thrown into the fire tell you, like, the only name that I heard for the first three months of the season was Doc [Rivers] screaming ‘Tyrese! Tyrese!’ just completely hammering him.”

Niang remembered that Maxey dealt well with the pressure he received from his head coach and managed to excel on the court while many others would have crumbled.

“I think we found a perennial All-Star. The kid is so talented: he has blazing speed, he shows it on both ends of the floor. He can shoot the ball at an elite level, and off the dribble, and he continues to work as if he’s walk on out of big-time college.

“He just works and I think this is going to be another huge summer for him and I can’t wait to see where it takes us because with the ball in Tyrese Maxey’s hands we can get a lot of stuff done..”

The post 76ers’ Georges Niang on Tyrese Maxey: “I think we found a perennial All-Star” appeared first on TalkBasket.net.

Clippers and Blazers to play preseason game in Seattle

Elmo gets vaccinated against COVID | Television